The man went on his knee to ask for his girlfriend’s hand in marriage while they were shopping. 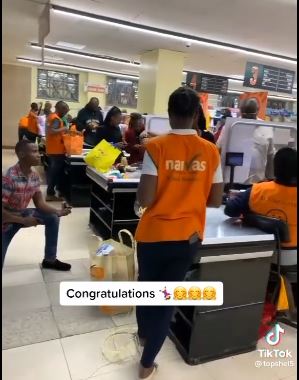 A video has captured the romantic moment a man popped the big question to his girlfriend at a mall in Kenya.

The man went on his knee to ask for his girlfriend’s hand in marriage while they were shopping.

The boyfriend was on his knee for some moments because his girl who was paying for what they bought at the counter did not notice him.

Shockingly, the cashiers and other customers just continued what they were doing as though something out of the ordinary was not happening in their presence.

After sometime, the girl turned and saw her man kneeling with a ring in his hand, which was when she became stunned and reacted.

However, after minutes of deafening silence, some employees of the mall started clapping and the couple hugged, although other customers still chose to mind their business.