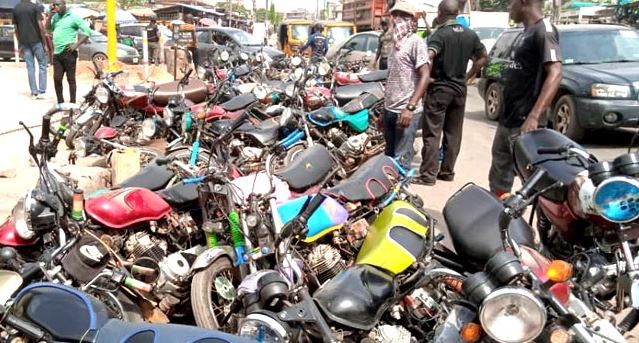 The Lagos State Taskforce on Thursday, June 2, disclosed that it will crush 2,228 seized motorcycles, popularly known as okada.

This comes after the state government placed a ban on commercial motorcycles in six local governments in the state after a sound engineer was lynched by motorcyclists in Lekki, Lagos.

Jejeloye, who spoke in Oshodi, said though the agency had been carrying out the crushing of bikes in the past, it would further intensify its effort in ensuring that all impounded okadas were crushed after following the due process.

The chairman stated that the laws were very clear for the Okada operators to see that their actions were in complete violation of the transport reform laws of the State that "no 2 persons shall ride, drive or propel a motorcycle or the tricycle on a major Highway within the State, and any person in contravention of this provision commits an offence and will be prosecuted."

CSP Jejeloye added that the agency’s efforts had been doubled since the June 1 ban.

He added that although the compliance rate was very high and encouraging, okada operators were not to be trusted.

"Their style of operation is synonymous with gorilla warfare- when we retreat, they advance, and when we advance, they retreat, but enforcement on the ban has come to stay. We will ensure that not a single offender operating his okada on the highways will be spared. We will keep watch and continue patrolling the affected parts of the state to ensure they do not get back on our roads," he said.