After 20 Years, Residents Bitten By Snakes Over Water Scarcity Get Borehole In Benue


Similarly, Fredrick Akusu, narrated how his neighbour, 20-year-old Jimmin went in search of water penultimate week, only to be bitten by a snake. 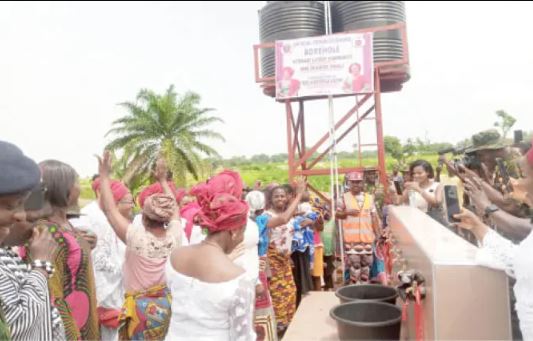 14-year-old Juliana Agbo was bitten by a snake a week ago along the bush path connecting the Nigerian Army School of Military Engineering (NASME) barracks to her Veterinary layout community in Makurdi, when she went in search of water from a stream, according to Daily Trust.

Agbo, already recovering from the snake’s venom when she spoke with Daily Trust correspondent about the incident at her parent’s home in the Veterinary layout of North Bank in Makurdi, said the wound was healing gradually.

“I went to fetch water alongside my mother at about 8am on Thursday, May 12, 2022 from a pond when suddenly a snake bit me on my toes.

“It was a very bad experience for me but my mother killed the snake instantly. I was then rushed for treatment and now I feel better,” Agbo narrated.

Her elder brother, Jacob Agbo, said the quick medical intervention saved his sister’s life as he explained that due to lack of water in the community, residents scout around or stray into the barracks to fetch water.

Similarly, Fredrick Akusu, narrated how his neighbour, 20-year-old Jimmin went in search of water penultimate week, only to be bitten by a snake.

Akusu said the victim was taken to Bishop Murray Memorial hospital where he was treated and his life saved.

Our correspondent reports that apart from the duo, several others had in the past been bitten by snakes, so the excitement of residents of the community knew no bound when on Tuesday, the Army officers wives donated a motorised borehole to them.

Catherine Shon, a woman leader in the community, said that for 17 years she had lived in that community, many people had been bitten by snakes while  in search for water around nearby ponds and streams in the locality.

“We are so happy; we never expected this gesture from the Army wives. Incidentally, our children have been beaten by snakes in the course of going to fetch water from the barracks.

“Some of them are raped at night in the course of scouting for water. The barrack residents still allow our children to fetch water though we are civilians. So, we thank our benefactors from the depth of our hearts,” Shon said.

Similarly, a resident, Samuel Tameldee, said the community had never gotten any form of potable water since its existence over 20 years ago.

He said, “All of us in our community fetch water from NASME barracks. So, we are happy that we now have potable water.

Joseph Ortese, who is chairman of the Veterinary layout land community association, expressed joy over the provision of the water and thanked the Army wives for bringing joy to the community.

“Our children will no longer trek for miles in search of water. Sometimes, they go out to look for water and are bitten by snakes or even raped by unknown people. But with this facility, our problem is solved. However, we still have issues of insecurity, erosion, bad roads and electricity. So, we are calling on government to come to our aid,” Ortese added.

It was indeed a joyous moment as 20 years after suffering from scarcity of water, the Veterinary Layout of North Bank community in Makurdi finally gets potable water.

Daily Trust Saturday reports that the water was provided for the community by the Nigeria Army Officers Wives Association (NAOWA) Nigerian Army School of Engineering (NASME) barracks, as part of its social responsibility to its host community.

Residents of the community one after the other lamented how they suffered due to water scarcity for over 20 years before the Army wives came to their rescue.

Mrs Adebukola Kadiri, the wife of Commander Corps of Engineers Nigeria Army, who, as special guest of honour, commissioned the borehole, said the project was conceived and achieved in line with the vision of NAOWA’s national president.

“The actualisation of this project is a testimony of the importance NAOWA places on the well being of youths, children and women living around their host community. It was built in less than three months. This shows our commitment to humanity,” she said.

Kadiri appreciated the community for providing the land for NAOWA to build the borehole just as she enjoined them to take care of the source of water so that it would serve generation after generation.

She further urged members of the community to report any suspicious movement to security agents and support the army and other security agencies in their effort to flush out criminals in their community.

Earlier, Mrs Olanike Omali, who is Coordinator, NAOWA, NASME chapter, disclosed that the project was conceived after a tour of neighbouring communities around the barracks was undertaken by her husband, Major General Joseph Omali.

A traditional ruler in the area, Chief Augustine Awule, in his vote of thanks during the commissioning, thanked the NASME commandant for citing the water project in the community.

“This project makes the women and children happier. I therefore appeal to the community to take very good care of this borehole for their own benefit,” the royal father admonished.