Drama As Governor Sanwo-Olu Drives Into Eagle Square On Speed


While many of them did not return after several hours, the convoy of the Lagos State governor got back in less than an hour. 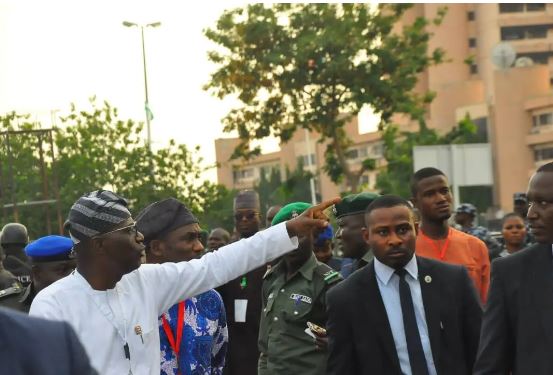 The Governor of Lagos State, Babajide Sanwo-Olu almost created a scene on Wednesday when he returned to Eagle Square, Abuja, venue of the ongoing Convention of the All Progressives Congress (APC).

Dignitaries who assembled for the convention departed the venue as voting was underway.

While many of them did not return after several hours, the convoy of the Lagos State governor got back in less than an hour.

In a manner suggesting that there could be some urgent issues to attend to, the vehicle conveying the governor raced into the venue.

The incident happened shortly after the agents representing various aspirants were asked to leave the sorting scene and watch from a distance.

The Master of Ceremony (MC) had announced that no one should get close to the sorting point except members of the election management committee.

This created a controversy as agents expressed worry and dissatisfaction.

Our correspondent reports that the resistance by agents had forced the authorities to call them back, directing that two agents should represent each of the aspirants.

Sorting of votes is currently ongoing in the exercise, which was keenly contested by 13 aspirants after seven of them stepped down for Tinubu.