Salah enjoyed a superb season as he scored 23 goals in the Premier League but could not guide Liverpool to the title as they finished behind City. 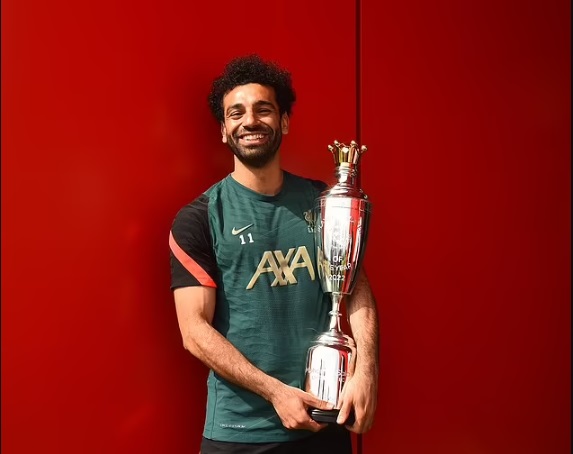 Liverpool forward, Mohamed Salah has claimed this season's PFA Player of the Year award.
Salah has been in super form for his club Liverpool. He was the joint-top goalscorer in the Premier League last term with 23 goals, beating Manchester City midfielder Kevin De Bruyne, his Liverpool team-mates Sadio Mane and Virgil van Dijk as well as Manchester United's Cristiano Ronaldo and Tottenham's Harry Kane to win the award.
Salah enjoyed a superb season as he scored 23 goals in the Premier League but could not guide Liverpool to the title as they finished behind City.
The 29-year-old also finished the season with the most assists, recording 13 to claim the Premier League's playmaker award.
Salah, who won it in  2018,  is now one of only nine players in PFA award history to have won two Players' Player trophies, joining Mark Hughes, Alan Shearer, Thierry Henry, and Gareth Bale, Ronaldo, Lucy Bronze, De Bruyne, and Fran Kirby.
'It's a great honour to win a trophy, individual or collective and this one is big so, very happy and very proud of that,' Salah, who won the League Cup and FA Cup with Liverpool last term, said.
'This one is a really good one to win, especially because it's voted by players. It shows you that you've worked really hard and you get what you worked for.
'I have my room with trophies in a cabinet and I made sure that I had another space for one more. I always keep space and just try to imagine that the trophies are going to come.
'When you get older, you feel like you're more stable and you know exactly what you want from football so I'm just trying to really chill and help the team.
'That's why I think I also won the playmaker because it's like you're more aware of the game, so you just try to make the people next to you better and try to make yourself better as well.'
Top Stories