Adams made the disclosure on Friday in his reaction to the St. Francis Catholic Church massacre, Owo, according to Nigerian Tribune. 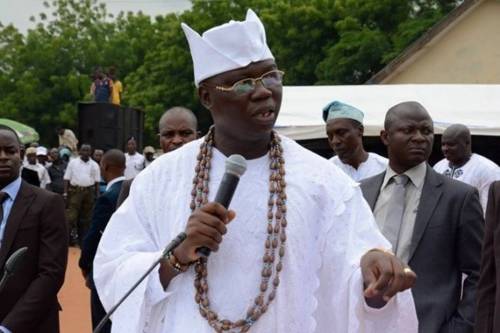 Chief Gani Adams, the Aare Onakakanfo of Yoruba land, has said that the terrorists who attacked the St.Francis Catholic Church members, Owo, Ondo State, camped in a secret forest and were being fed by food supplied by a helicopter, according to a report by SaharaReporters.

Adams made the disclosure on Friday in his reaction to the St. Francis Catholic Church massacre, Owo, according to Nigerian Tribune.

According to him, he also suspected that the heinous attack was carried out by an international organisation as “It was a highly coordinated attack.”

He said, “Well, I suspect it was an attack by an international organization. It was a highly coordinated attack.

“This is the first time we are witnessing this type of attack in Yoruba land. We have seen different attacks perpetrated by Fulani herdsmen, however, the Owo Church attack sounded unusual.

“The information at our disposal indicated that the attackers were about seven in number and they came with explosives that were allegedly planted under the Alter of the church.

“And immediately the bomb exploded, it was a horror as worshippers were scampering for their lives and at the same time, the attackers were shooting sporadically.

“So far, according to the state government, 38 people were killed while about 64 others were still at the hospital. We pray not to have more casualties.

“This attack is highly condemnable. Any right-thinking person will condemn it totally.

“However, on the Owo Church attack, the SSSG raised the alarm about five weeks ago that some terrorists have invaded the South-West, but unfortunately none of the state governors really addressed the issues. So, what led to the Owo attack was premeditated.

“The information we had earlier was that some terrorists have invaded a very close forest in Owo.

“These terrorists, according to our information, have their food being supplied to them via helicopter, and the Olowo, who is the traditional ruler of the ancient town, even the state government could not flush them out of the thick forest

“So, that tells you that they have occupied the bush to perpetrate their calculated killings,” he added.

The Yoruba Generalissimo, who coordinates SSSG, said pressure was being mounted on the “government of the South-West region to make sure that they tackle the spate of insecurity in the region.

“However, I want to urge the government, particularly, our governors in the South-West to brace up against these terrorists.

“We are ready to support them by ensuring that the region is safe and secured. We are also ready to offer advice and information, where necessary to forestall further attacks on the region.”