The scientists trooped en masse and marched to the Police headquarters, Abakaliki to register their fears and solicit the security agency’s unrelenting effort towards unravelling the murderers and bringing them to book. 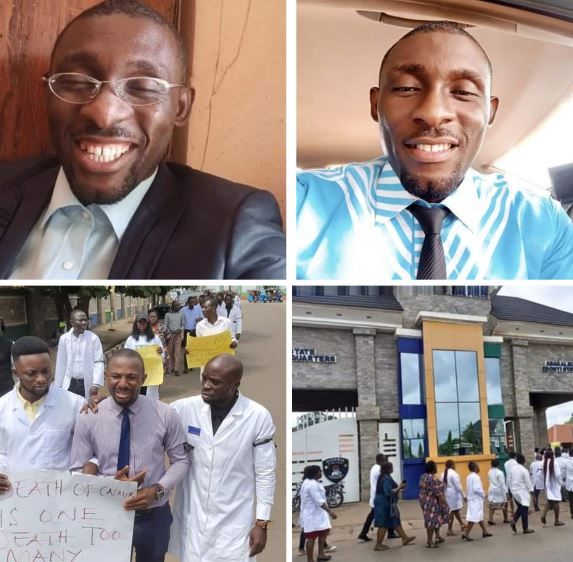 Following the brutal murder of a medical student, Casmir Ani, in Abakaliki, some medical laboratory scientists staged a peaceful protest to lament the killing.

The scientists on Tuesday, June 14, trooped en masse and marched to the Police headquarters, Abakaliki to register their fears and solicit the security agency’s unrelenting efforts towards unravelling the murderers and bringing them to book.

The protesters carried placards with various inscriptions such as “Death of Casmir is one death, too many”, “Government must wake up to their responsibility of protecting lives”, “Scientist Casmir is a father, husband, so, justice must be given to his family and associates”, “We demand for culprits to be brought to book”, “these senseless killings must stop”, among others.

Presenting their mission to the Police Commissioner, the Publicity Secretary of the Association of Medical Laboratory Scientists of Nigeria (AMLSN), Ebonyi State Chapter, Obiefuna Okeke, explained that the death of Casmir has put fears in their hearts.

In a letter signed by the association’s State Chairman, Clement Alobu and the Secretary, Godwin Nwibo, submitted to the Police Commissioner entitled “A Demand for Justice”, dated June 14, the association wrote:

“It is with deep emotional pain and bleeding hearts that we, the members of the above-named association, write to inform your office of the gruesome murder of Mr. Casmir Afamefuna Ani who was our member and professional colleague, on the night of Friday, June 10, 2022 around Ojeowere/ Brackenbury street area.

"With this ugly development, we no longer feel safe to even do our jobs since one of us could be mowed down so easily without any intervention by the law enforcement agents or even the state vigilante outfit (alias Ebube Agu).”

The group demanded that the matter be taken over by the State Criminal Investigation Department for a more robust investigation, while adequate manpower and logistics should be provided by the Command to ensure that the perpetrators were tracked.

"To use your good offices to interface with any relevant sister security agency or organization, our association inclusive, to get the much-needed justice for the grieving young widow and four little kids of our slain colleague, the youngest being just about three weeks old so that they could have some closure knowing that those that cut short the life of their husband/father did not get away with their evil act,” they added.

Addressing the protesters, the Deputy Commissioner of Police, State Criminal Investigation Department, Clement Robert, who represented the Commissioner, Garba Aliyu said the command was already aware of the incident.

“We are aware of that matter, and we are on it. We will do everything to ensure that those responsible will be brought to book, and be brought to justice," he stated.