Mbaka had declared that unless God ceases to exist, Obi would never smell the seat of the president. 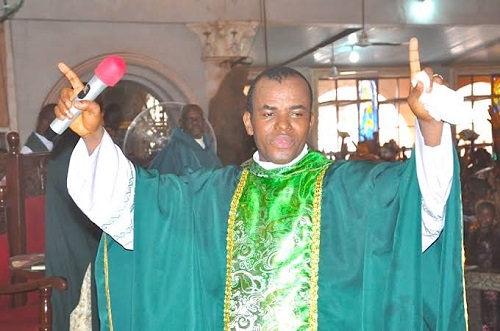 The Spiritual Director of Adoration Ministry, Enugu, Fr. Ejike Mbaka has been given a warning by a former senator.
Senator Shehu Sani on Friday warned Mbaka not to come near Bianca, wife of late Biafra warlord, Ikemba Odumegwu Chukwuemeka Ojukwu, amid his latest comment.
Recall that Mbaka had, during his ministry’s gathering in Enugu State, said Mr. Peter Obi, the 2023 presidential candidate of the Labour Party, LP, can’t be Nigeria’s president because he is a ‘stingy man.’
He declared that unless God ceases to exist, Obi would never smell the seat of the president.
However, Sani, in a tweet via his Twitter handle on Friday morning, advised Mbaka not to allow Bianca to come near him.
He tweeted, “My advice; Our Father Mbaka should neither come near Bianca nor allow Bianca come near him.”
His tweet is an apparent reference to the slapping incident between Bianca and former Anambra First Lady, Ebelechukwu Obiano, at Prof. Charles Soludo’s inauguration as governor.
Meanwhile, Bianca had since responded to Mbaka over his latest comments on Obi.
Bianca, recounting her experience with Obi, disclosed how the former Anambra Governor refused to buy a $3,985 suit and went for a $220 suit in 2009 just to donate money to help the needy.
According to her, if Obi’s value is defined as ‘stinginess’ then Nigeria needs to adopt such a mold for a sustainable environment.
Top Stories