How Officers Of DSS Stormed My House, Arrested And Detained Me Over WhatsApp Posts – PDP Women Leader, Aishatu


Ibrahim said she was taken aback when over 20 security operatives stormed her house at Zone 7, Abuja without any means of identification. 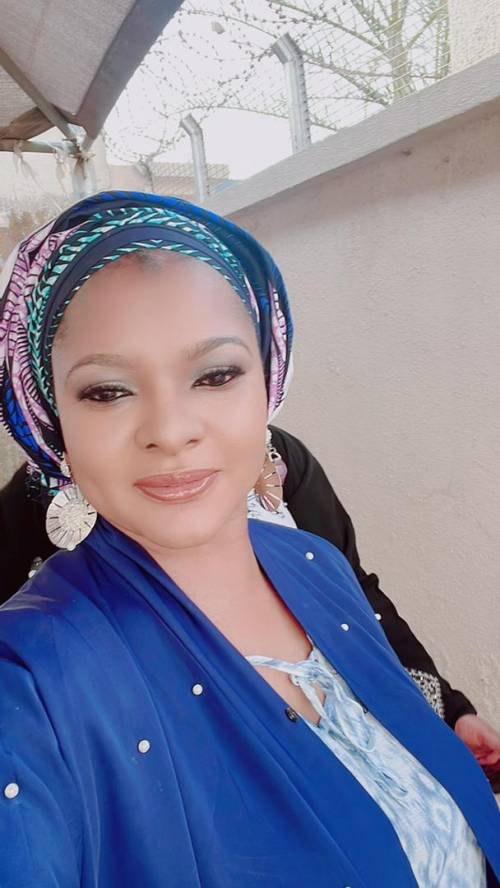 A former women leader of the Peoples Democratic Party for the North West Zone, Aishatu Madina Ibrahim, has said she was arrested on Wednesday by officials of the Department of State Services from her residence in Abuja and held in their custody for about 10 hours, according to SaharaReporters.

Ibrahim, in an interview with SaharaReporters, said she was taken aback when over 20 security operatives stormed her house at Zone 7, Abuja without any means of identification.

She said the operatives were masked up and heavily armed.

She said she tried to stop them from gaining access to her apartment but one of them shoved her aside and went in.

According to her, the officials said they were arresting her due to a social media post where she allegedly made derogatory remarks about President Muhammadu Buhari; National Leader of the All Progressives Congress, Bola Tinubu and the First Lady, Aisha Buhari.

The posts were particularly linked to the APC presidential primary elections held in Abuja in which Tinubu emerged as the winner.

Ibrahim said she could not remember making some of the posts but insisted she was not going to be handcuffed particularly as it was not a criminal offence.

According to her, it was while there were in transit that she observed the attire of the officials and queried if they were taking her to the DSS office in Abuja but one of them claimed they were going to the office of the National Security Adviser, while another officer said it was the DSS office.

She said the officials even informed her that they were aware she had not committed a crime but her arrest had a political undertone.

Ibrahim said she was taken from her house by 11 am on Wednesday and allowed to return to her house by 9 pm. She said her phones were seized and when she requested to contact her lawyer and family, the officials didn't grant the request.

She said, “They said I posted something, making comments about Tinubu and Buhari with the caption ‘Frying pan to fire', that I posted on WhatsApp, Facebook and TikTok.

“Some of the posts, I can't even remember them, I don't think I posted on TikTok and Facebook but probably WhatsApp. I am a politician, a PDP member, and the immediate past North-West PDP women leader. Even the one they said I posted on my WhatsApp status, I can't remember posting some because I do post a lot of things.

“During the APC Primaries, there was a time they called on Aisha Buhari to come on stage and she refused. They said I posted that ‘Aisha no wan climb stage with some people o'. I can't remember posting this.

“The picture of Buhari and Tinubu, I might have posted it but the Aisha Buhari own, I can't remember. I belong to over 50 WhatsApp groups and there are lots of things that are shared there that we reshare. In some of these groups, there are people that are not members of your party.

“On Wednesday, over 20 DSS officials stormed my estate at Zone 7 Abuja. Everybody in the estate came out to ask what happened, and why I was being taken away. It was when I returned that my neighbours told me that the officers they saw were more than 30. They came in their vehicles.

“The officers were not with an arrest warrant neither were they in uniform so there was no way I could identify them. In fact, when they arrived, they jammed the network of the area.

“They wore masks and black attire and they were fully armed. When they first arrived and they said they wanted to search my apartment, I refused because I didn't know who they were. One of them pushed me aside and went inside the house.

“Then they asked me to go with them to their office, they wanted to handcuff me and I refused. I told them no, I am not a criminal.

“While we were going, I observed that a part of their attire looked like DSS uniform and I asked them if they were from there, one of them said no, that they were taking me to National Security Adviser's office. The other person said we were going to the DSS office.

“When I got there, they interrogated me at three different points. They wanted to see if there would be discrepancies in my statements. They said I made derogatory remarks about the First Family. And about Tinubu during the APC Primaries.

“I was not assaulted there but I was not allowed access to my phone. I told them I wanted to call my lawyer and my family so they would know my whereabouts, but they didn't allow me to do this.

“After hours of interrogation, they warned me never to post anything that is against the First Family and Tinubu and I was asked to write a statement. I wrote there that I would not post anything I cannot prove before the law and that as a member of the major opposition party, it is my duty to point out the flaws of the opposition and seek how the country can get better.

“Also, I said I never insulted Aisha Buhari and I have no reason to do that because she is someone I respect a lot. She even speaks up against the wrongdoings in the APC."

Nigeria’s secret police, DSS are in the habit of harassing people for criticising public office holders.

For instance, in February 2022, the Executive Director of the International Press Institute and former President of the National Association of Nigerian Students, Mr Lanre Arogundade, was arrested and detained by the DSS allegedly over his criticism of President Muhammadu Buhari’s government.

The activist had just returned to Nigeria from Banjul, The Gambia where he had attended a training programme on ‘Conflict Reporting for Journalists’.