The Governor‘s camp had been kicking against the process that led to the emergence of the Delta Governor, Ifeanyi Okowa, ahead of Wike. 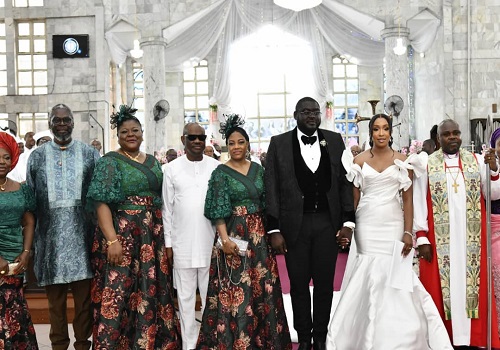 The Rivers State Governor, Nyesom Wike at the weekend made his first public appearance after the controversies that surrounded his rejection by the Peoples Democratic Party (PDP) from becoming the running mate to the party’s presidential candidate Atiku Abubakar, The Nation reports.

The Governor ‘s camp had been kicking against the process that led to the emergence of the Delta Governor, Ifeanyi Okowa, ahead of Wike.

Dressed in white kaftan with his face decked in black goggles, Wike, who appeared unruffled, was accompanied by his wife, Justice Eberechi Suzette Nyesom-Wike, to attend the wedding ceremony of Mr. Chima Emmanuel Aguma.

Chima, whose ceremony was attended by many dignitaries on Saturday, is the son of late Rivers Attorney-General and Commissioner for Justice, Emmanuel Chinwenwo Aguma (SAN) and the immediate past Commissioner for Social Welfare and Rehabilitation, Mrs. Inimefien Aguma.

In his sermon, Rt. Rev. Wisdom Budu Ihunwo, Lord Bishop, Diocese of Niger Delta North, explained that marriage between a man and woman was ordained by God for the purpose of procreation.

He said God’s prescription for successful marriage is for a man should love his wife unconditionally, while the woman in turn, should be submissive to her husband.

According to him, adherence to the divine instruction remains the primary recipe for any successful marriage.

He advised the couple to cultivate the good habit of forgiveness irrespective of the offence.

“Learn how to forgive each other. There should be room for forgiveness. Don’t keep records of offences.”