The student who was in senior secondary one (SS 1) was beaten repeatedly on the head for allegedly having bushy hair and not having a haircut before school day. 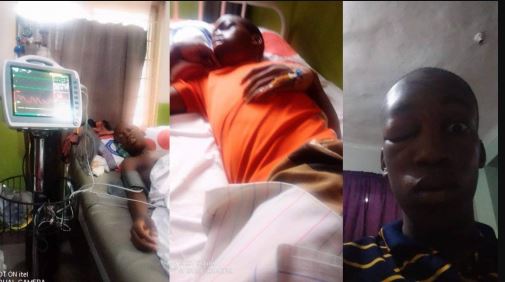 In what will come across as a really startling development, a student of Command Secondary School, Enugu has been reportedly flogged to death by a soldier whose identity is yet to be revealed.

The student who was in senior secondary one (SS 1) was beaten repeatedly on the head for allegedly having bushy hair and not having a haircut before school day.

The mother broke the news in a Facebook post on the Nkanu People of Enugu State Nigeria platform with pictures of the deceased showing a swollen eye and head before his demise.

Sources told SaharaReporters that the boy's head started swelling, causing the parents to move him from one hospital to another until his untimely death.

The mother of the deceased, Adaeze Chibuzo, on her Facebook page, wrote; “It is still very hard to believe that you are gone my son but one thing I know is that God will surely fight for us, rest in peace my son.

"Army man flogged my son in school to death in command sec, sch enugu. Rip my first fruit in life."

Meanwhile, Facebook users have reacted to the incident, describing it as cruel as they called for justice.

A Facebook user, Mrs Eneh Nididiamaka wrote, "It is indeed a sad story what on earth did this boy commit to warrant such beating from a heartless soldier.

Nnaji Miriam Izuogu wrote, “This is exactly what happened to my kid brother last year November 2021, in the same skool (school) and now this story, today Paschal my brother is no more  Rip to this soul, it’s so painful, Paschal is supposed to be writing his WAEC exams by now, let the anger of God descend on the army killer of Paschal and this son of Ndidiamaka."

Another user, Oge Ezeji wrote, “Madam, is very painful you have to lose your son yesterday I was very bitter when my son came back and was narrating the story to me. A boy who is supposed to start his inter command exam today. Soldier it will not be well with you.”

Meanwhile, efforts to get the reaction of the Army were unsuccessful as the Deputy Army Public Relations, 82 Division, Col Abubakar Abdullahi, didn't pick up his phone when SaharaReporters called him on his mobile line.

Also the Nigerian Army Public Relations Officer, Brig-Gen. Onyema Nwachukwu did not also answer his calls nor reply to messages sent to him.