The criticisms began after the cleric shared a tweet many inferred was directed at Obi. 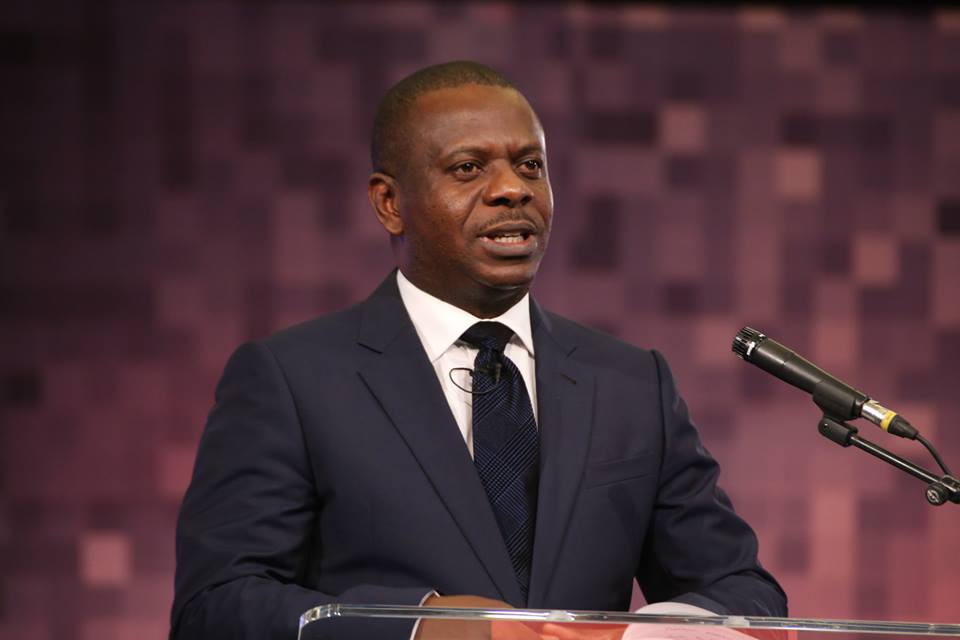 Pastor Poju Oyemade has come under heavy criticism from supporters of the Labour Party’s presidential candidate, Peter Obi.
Poju is the Senior Pastor and Founder of The Covenant.
The pastor was lambasted after he shared a tweet many assumed was directed at Obi.
Oyemade had talked about the enthusiasm of youths which according to him, shouldn’t be wasted on poorly planned projects.
He also tweeted that Jesus said that “no man goes to battle without taking stock first nor laying the foundation of a tower”.
The tweets came after many politicians have argued that Obi will not win the 2023 presidential election because he lacks ‘political structure’
However, despite that Pastor Poju did not mention Obi’s name, the supporters of the Labour Party’s presidential candidate took offence to the cleric’s message.
And following the backlash he received, the cleric deleted his tweets.

Below are some of the reactions on Twitter on Friday; 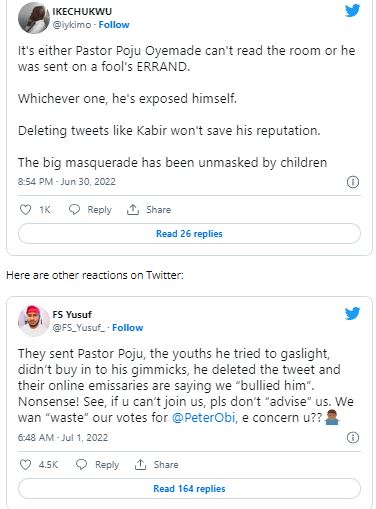 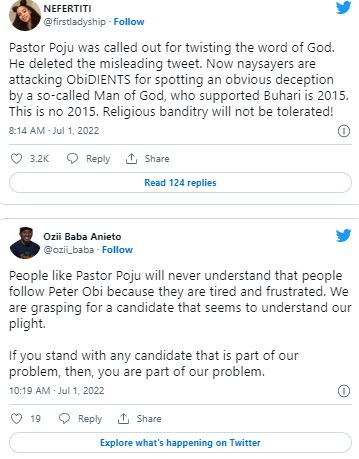 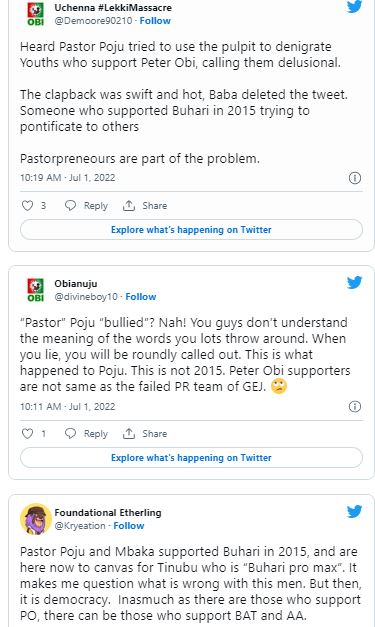 @iykimo: “Nobody can bully Pastor Poju Oyemade to delete an entire thread…
He realized he goofed
1. It’s still 8 months to the General elections
2. APC is planning a Muslim /Muslim ticket
3. AA and BAT don’t inspire enthusiasm
“He didn’t read the room. Thread deleted.”
@firstladyship: “Pastor Poju was called out for twisting the word of God. He deleted the misleading tweet. Now naysayers are attacking ObiDIENTS for spotting an obvious deception by a so-called Man of God, who supported Buhari is 2015. This is no 2015. Religious banditry will not be tolerated!”
@Nkemchor_”Pastor Poju referred to the Obidient Movement by the Youths as “enthusiasm wasted on a Poorly Planned Project.” These Pastorpreneurs wear suits and speak Good English to hoodwink their audience for cash. The audacity! Why did he delete the tweet David Hundeyin quoted?”
Another Twitter user wrote: “Pastor Poju the Motivational speaker that cannot “Motivate” the Youths To Take Back Nigeria. Instead, he has joined the Naysayers that only “Structures” can win Election.
Sir be bold & declare who you are supporting.”
Top Stories