The Pastors were arraigned on a 10-count charge of kidnapping and unlawful harbour. 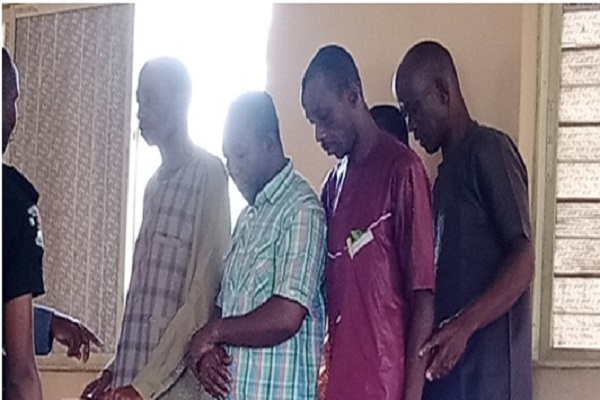 The Ondo Police command has arraigned the General Overseer of the Whole Bible Believer Church, Ondo, David Anifowose, and four other pastors over allegations of kidnapping.
The five pastors were docked before an Akure Magistrates’ Court for alleged kidnapping.
Other pastors docked with Anifowose were Josiah Peter 49, Stephen Olawole 51, Blessing John 60 and Gbenga Ayembo Gbenga 56.
Last week, security operatives and youths had forcefully removed 77 persons, including 26 children from the basement of the church.
They had been staying in the church basement fast and praying while awaiting the second coming of Jesus Christ in September this year.
Many of the children some of whom were undergraduates in various universities had abandoned their studies to stay in the basement.
Married women also left their husbands to stay in the church.
The Pastors were arraigned on a 10-count charge of kidnapping and unlawful harbour.
They pleaded not guilty to the charges.
Police prosecutor, Augustine Omhenimhen, told the court that the pastors unlawfully imprisoned the children of one Elizabeth Reuben and stopped their parents from gaining access to them.
Omhenimhen said the accused persons also took custody and harboured wife and children of one Patrick Olaniyan and blocked access to them.
He said the pastors unlawfully deprived the church members of their freedom against their will and also placed them in a dehumanizing environment which made them prone to diseases.
The accused persons were also alleged to have assaulted, resisted and willfully obstructed Inspector Rotimi Ogunji who was on lawful duty at the church’s premises.
Other charges were unlawful taking away of underaged girls from the protection of their parents without their permission.
He said the offences contravened and punishable under Section 225, 361, 364 (2), 365, 365(2), 516 of the Criminal Code Cap, 37. Volume 1, Laws of Ondo State, 2006.
Defense counsel, Oladele Ayoola urged the court not to remand the accused persons.
Presiding Magistrate, O.R Yakubu ordered that the accused persons be remanded in police custody.
He adjourned the case to July 18, 2022 for hearing of bail application.
Top Stories