According to terms of the competition, the winner was entitled to a sum of N25million prize while the first and second runners up were to go home with N15million and N10million respectively. 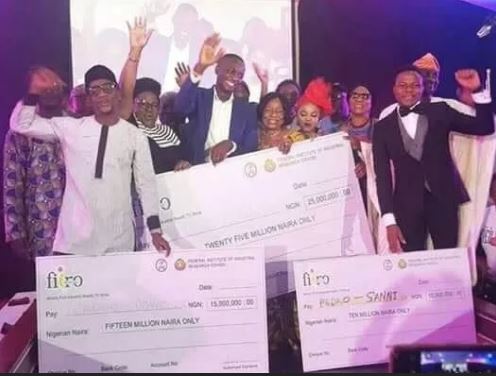 It has been revealed that the three winners of a reality Television show organised by the Federal Institute of Industrial Research Oshodi (FIIRO), Lagos State, have not yet been paid.

The winners have lamented that they have not been paid their N50million prizes since 2019.

The competition designed to discover and support young industrial entrepreneurs with fresh business ideas and plans financially had 20 participants selected for the final stage, out of which, three participants emerged including Adewale Adebola as the winner, Ajiroghene Omanudhowo as the first runner-up and Sanni Ibiyemi Pedro as the second runner-up.

According to terms of the competition, the winner was entitled to a sum of N25million prize while the first and second runners up were to go home with N15million and N10million respectively.

But three years later, FIIRO and its partners have refused to pay the winners their prizes.

The winners told SaharaReporters that they had written several letters to FIIRO and its partners and held several meetings over the unpaid prizes but nothing came out of their efforts as they had continued to be ignored.

Speaking with SaharaReporters, one of them said, “We have written letters to FIIRO but no response. We have also had several meetings and no response still. We are being ignored by all parties involved in this programme despite all the letters, appeals and meetings.

“Families and friends voted with money towards our winning and most of them believe we have been paid while that has not happened till date. Now over three years, many people are already assuming we were paid and that we have mismanaged the funds and that is detrimental to our reputation.

“We demand that we should be paid and if not, the government should at least publicly come out to say they have not paid us.”

The winners lamented that the funds, if paid, would have gone a long way to help them grow their businesses but “the government has totally ignored us.”

The winner, Adewale Adebola lamented that recently, an estate project wanted to utilise the technology he pitched at the competition but unfortunately he had not been able to kick it off since FIIRO refused to make the payment.