The court struck out the matter after a series of adjournments by the state without any iota of evidence presented against them. 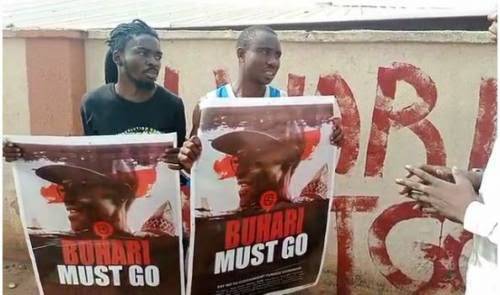 Two anti-Buhari protesters have been discharged and acquitted by a Magistrate Court sitting in Lokoja, Kogi State.
The court struck out the suit against two activists who had protested against President Muhammadu Buhari.
The court, on Thursday, discharged and acquitted Larry Emmanuel and Anene Victor Udoka.
The court struck out the matter after a series of adjournments by the state without any iota of evidence presented against them.
Thus the suit: State v Anine Victor Udoka & Emmanuel Larry: Case No: CMCL/123m/2021 was thrown out of the window.
In April 2021, violent youths descended on the two middle-aged protesters who were pasting Buhari-Must-Go posters in Lokoja, the Kogi State capital.
SaharaReporters learnt that the irate mob flogged the two youths, filmed them, and brutalised them before they were later handed over to the police.
It was gathered that the police thereafter quizzed the two protesters and detained them when they insisted on seeing their lawyer before making a statement.
In some viral videos, the protesters were seen being molested and questioned by the mob before they were flogged as the youths forced them to clean their painting of “Buhari Must Go.”
They were granted bail after spending 78 days in detention.
Top Stories