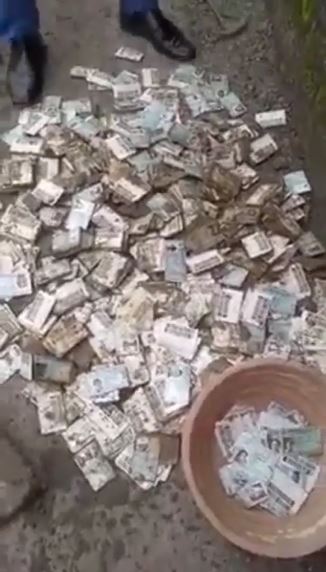 The Independent National Electoral Commission (INEC) has reacted to trending videos of buried Permanent Voters Card (PVC) discovered in some parts of the South East by unknown persons.
According to INEC, it has now commenced investigation to unravel what happened and those responsible.
In a statement by INEC National Commissioner and Chairman Information and Voter Education Committee, Festus Okoye, the Commission said it is not taking the allegations lightly.
The commission said: “The attention of the Commission has been drawn to videos trending online of Permanent Voters Cards (PVCs) allegedly buried underground in some locations, including the compound of a high-profile person.
“The Commission is not taking these allegations lightly. We have commenced an immediate investigation and anyone found culpable in this diabolical scheme clearly intended to disenfranchise Nigerians will be sanctioned under the law. Every eligible Nigerian who registered as a voter is entitled to his/her PVC. The constitutional right to vote in any election must never be suppressed or abridged in any way”.
It added: “As far as the record of the Commission is concerned, PVCs have been printed for all valid registrants in Nigeria up to 14th January 2022 and delivered to all the States of the Federation for collection by voters. We will not allow retrogressive elements to sabotage our efforts.
“The issues of voter registration, a compilation of the voters’ roll and issuance of PVCs are at the heart of any democratic elections and the Commission is working hard to ensure that every eligible citizen who appears in person at the registration venue is registered. We assure Nigerians that this matter will be pursued to its logical conclusion.
“Already, the Commission is reviewing the procedure for collecting PVCs to make it less cumbersome and more transparent. This will be a major topic at the next regular quarterly meeting with stakeholders so that working together we can find a lasting solution to the issue.
“Meanwhile, we appeal to those who found the allegedly buried PVCs to deliver them to our nearest State or Local Government office. This will be their patriotic contribution to the consolidation of our electoral process”.
The Commission also reported a fresh attack on its officials conducting voter registration Igboeze Council Area of Enugu State.
Okoye said: “the Administrative Secretary in Enugu State, Mr. Jude Okwuonu, reported that at about 2.30pm on Wednesday 13th July 2022 our officials involved in the Continuous Voter Registration (CVR) exercise were attacked by unknown gunmen in Community Primary School Umuopu in Umuozzi Ward 19 of Igboeze North Local Government Area.
“The gunmen fired sporadically into the air to disperse registrants and registration officials. In the ensuing stampede, one of our staff sustained injuries and is receiving treatment in a hospital.
“Consequently, Ward level registration of voters in Igboeze North is hereby suspended.”
Top Stories