Parading the suspects before journalists, the Zonal Public Relations Officer, SP Hauwa Idris-Adamu, disclosed that the suspects confessed to being members of different confraternities. 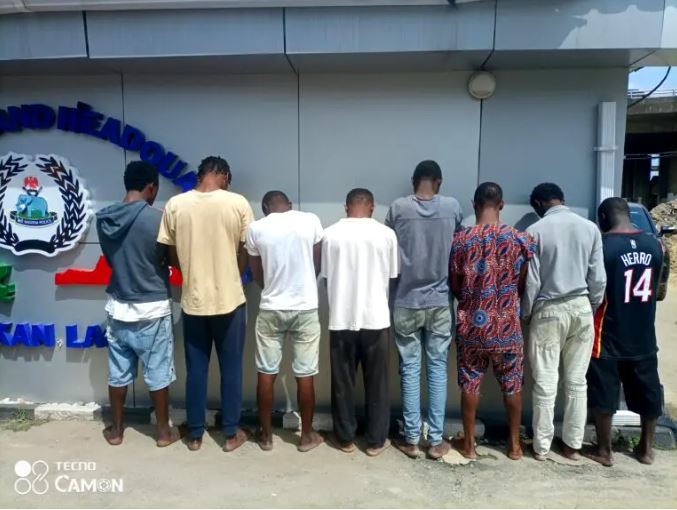 Eight persons have been arrested by the Zone 2 Police Command, Onikan, Lagos.

They were arrested in connection with the attack on the convoy of the Presidential candidate of the All Progressives Congress, APC, Asiwaju Bola Tinubu, last month in Lagos.

Tinubu, who returned to Lagos on Sunday, June 19, 2022, after emerging as his party’s flag bearer in the presidential primaries that took place at the Eagles Square, Abuja, had visited the palace of the Oba of Lagos, Rilwan Akiolu same day.

However, on his way out, some armed hoodlums attacked his convoy, shattering the windows of the press corps bus with stones and machetes and injured some journalists in the process.

Parading the suspects before journalists, the Zonal Public Relations Officer, SP Hauwa Idris-Adamu, disclosed that the suspects confessed to being members of different confraternities.

She said that the zone had launched a manhunt for the sponsor of the attack.

According to her, ”The suspects are cultists. They belong to Aiye, Eiye, Oju Akpaco and Esuru boys confraternities. They have mentioned the name of the sponsor of the attack,who is at large.

“Investigations are still ongoing and we will get back to the press as soon as we have the principal suspect in our net”.

In another development, the Zone’s Monitoring Unit has arrested seven suspected members of a syndicate that broke into Jus Partners Cosmopolitan Limited, a telecommunication company in Yaba area of Lagos, on June 20, 2022.

The suspects who scaled the fence, tied the private guards on duty and carted away 16 drums of 96 Core Starlite Optic cables, estimated at N80 million.

Explaining how the suspects were arrested in different areas of the State, the Zonal Public Relations Officer, said, when the information reached the AIG, Bode Adeleke, he directed the zone’s monitoring unit headed by CSP Uba Adams to uncover the cabal.

The Unit as gathered swung into action and deployed its technical and Intelligence-based investigation.

A team of covert detectives reportedly accompanied the complainant to Alaba International market and directed the company’s representative who pretended to be a customer, to identify the stolen cable from the section of cable stores.

Some of the cables were said to have been found in one of the shops.

Police sources hinted that “Photographs of the exact cable were shown and to show commitment, the company was directed to make a down payment of N500,000 before the company’s representative could be taken to the warehouse, where he could get the needed quantity.

A deal that struck and money was remitted into the account of one Felix Onyema, who turned out to be the principal suspect. The cables were traced to Onyema’s residence at Sibiri area of the State. But he has gone into hiding.