Kidnappers Tried To Cut Off My Fingers — Chaplain Reveals Harrowing Details Of Methodist Prelate, Others’ Kidnapping


The cleric talked about his kidnapping, alongside his Chaplain, Jeremiah Abidemi Shittu, and the Bishop of Owerri, along Enugu-Port-Harcourt Expressway, Abia State last week. 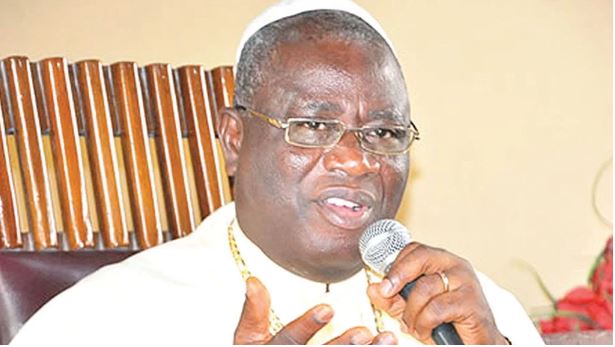 His Eminence Samuel Kanu Uche, the Prelate of the Methodist Church Nigeria, has spoken about his horrific experiences in kidnappers' den.

The cleric talked about his kidnapping, alongside his Chaplain, Jeremiah Abidemi Shittu, and the Bishop of Owerri, along Enugu-Port-Harcourt Expressway, Abia State last week.

According to him, N100million ransom was paid to their abductors to secure their release

The Chaplain, Shittu, in this conversation with Sunday Vanguard, provides harrowing details.

We received with shock the news of the kidnapping of the Prelate, you and one other cleric. How did it happen?

What happened was that we went for a national assignment and, as you may know, Methodist Church is like the Federal Government of Nigeria. So, we have our leader who is in charge of all churches in Nigeria and, anything we want to do, he has to perform what we call ‘safadocal’ work, which is his primary responsibility.

So, we went to Umunochi, Nnochi Diocese, Abia State. We didn’t conclude the service because we had to hurry up to catch our flight from Owerri back to Lagos. Along the road, just after passing a police station and a security checkpoint, we saw some armed men, dressed in black. We thought they were Mobile Policemen.

As soon as we passed them, the second set started shooting at us, we manoeuvred them but couldn’t manoeuvre the next set, as their bullet punctured our car’s tyres. We swerved into the bush and stopped.

They ran to us and, as soon as we alighted from the car, they started firing at us. One of the bullets missed my head narrowly. When I ran back and opened the car for the Prelate, they caught him as he couldn’t run.

Since they had captured our leader, I decided not to run because, as his Chaplain, I couldn’t leave him even if I had the chance of running away. They dragged us into a bush where we climbed one hill after the other barefooted as they ordered us to remove our shoes.

It was in this process that our leader, being an elderly person, hit his head against a tree, and blood started gushing out, soaked his handkerchief and mine that I gave him. Even with that, we were not allowed to stop, rather, we continued trekking for over an hour.

The suit (brigade uniform) we wore, especially mine, tore into two. Our captors ransacked our bags, which they took from the car, taking everything. They also removed the Episcopal ring from the two Bishops (our leader and our host, the Bishop of Owerri).

They removed everything that depicts the office of a Prelate and Bishop from them and also took my wedding ring, which I had never removed since I wedded 18 years ago.They wanted to cut my finger off and take it, put I pleaded with them to allow me remove it. Since those things are gold they took them alongside the cash we had on us, before talking about ransom.

How did they establish contact with the church for ransom negotiation?

First, they left us for about 7 hours. We were five initially but they shot two, we only prayed that the bullets did not hit them where they would die, and as such, able to escape. I think they were the ones that escaped to tell people about the incident.

Their purpose of keeping us for over 7 hours was to create tension. They collected our phones, switched them off, until they were ready to negotiate. They switched the phones on, one after the other. One person would talk before the other phone is switched on for the other to talk.They told us that each of us will pay N50m but later reduced it to N40m. When we begged for N10m, they threatened to cut off our heads.

They were torturing and threatening us. Finally, they said they would not take less than N100m.They said they couldn’t negotiate with any other person, but us. When our people wanted to reduce the money, they laid the Bishop down and wanted to cut off his head.We begged them, promising to pay.

Yes, they were paid N100m after we had spent 24hours. In all, we spent almost 28 hours in the bush without food or water. So, when the money was ready, they asked our people to put them in 5 ‘Ghana must go’ bags, N20m in each bag.

How were your people able to raise such amount within……

…Cuts in. It was prayer that did the magic. People contributed and the Church borrowed to make it up because, if we should spend the night, our leader might die of stress, having trekked a lot as an elderly man.

So, they told them where to bring the money and the route to take. When they got the money, they congratulated us but we were still not sure they would release us but we kept on praying. Finally, they led us to an old road, somewhere around Imo / Abia boundary and left us there. The road was blocked by the military and inhabitants of the area are not allowed into the area. From there, we trecked for over an hour before getting to where our people were waiting for us.

Were you people blindfolded at any point?

No. We were not blindfolded or tied but we were warned not to look at their faces, though we still managed to peep at their faces which they sometimes covered.

So, from their speech and your observation, where do you think they came from?

Ah! Ah!! There is no insinuation, no arguement about taste. Again, a Yoruba adage says that it is the owner of stomach that knows if it is full or empty.We are men of God.What do we gain in telling lies? They are purely Fulani people.

Their leader told us that his father came from Sudan and that they brought some of them from Zamfara State. He also said he was born in Umuahia and spoke Igbo fluently. I think the Holy Spirit entered him, making him to reveal some of their secrets.

Again, he said they were bringing in weapons, that they wanted to wipe the Igbo race and that they had taken over Lagos / Ibadan Expressway and were only waiting for signal before striking. He also said that President Buhari disappointed them, that he is not doing what they asked him to do and that if they see him, they would kill and chew him raw.

They blamed government for their predicament, saying that it was not their wish to take up arms, but had to do that since there was no job. I have lived in the North.They are pure Fulani, speaking Fula.

What were the effects of the kidnapping on your families and church members while the episode lasted?

We did not contact our families directly, rather, we contacted the leader of the Church to see if he could help us raise the N100m ransom. However, our families got the news and were praying. Even when our captors allowed us to speak to our people, they heard our people praying and ordered us to switch off the phone immediately.

How are you people feeling now?

We are recuperating. You know we sustained various degrees of injury but God is taking care of that.Our doctors are doing their best, too.

I observed certain things while in captivity. I observed that only their leader spoke English, other gang members spoke either Pidgin English or Fulani.

I also observed that something gave them information. Sometimes, we could hear alarm and, as soon as that was heard, they would change location. As a linguist, I also noticed that they had a way they communicated and I think they got that from one bird that sings in that bush.They communicate in bird’s voice. If they noticed a movement in the bush, they would clap their hands in a special way and get a response. If there was no responsed, they go to the spot to find out what it was.

There was a time they wanted to eat and they asked us if we could eat noodles so they could order for us but we turned the offer down, politely.They later ordered for food, drinks, cigarette, etc from Umuahia via phone.They explained that their supplier couldn’t get to the bush in ‘Umunochi’ before we left due to the sit-at-home stuff.

We should then ask, who are the people communicating with them?

Why did they want the N100m shared into five equal parts?

Why did the people who came to pick the money pass the forbidden road?

I really thank God for saving our lives through those that helped to raise the ransom but government should do something about security.