Kipkemei who has just graduated from Meru University, Kenya with a degree in Nursing is suspected to have been murdered before his body was brought silently to his room. 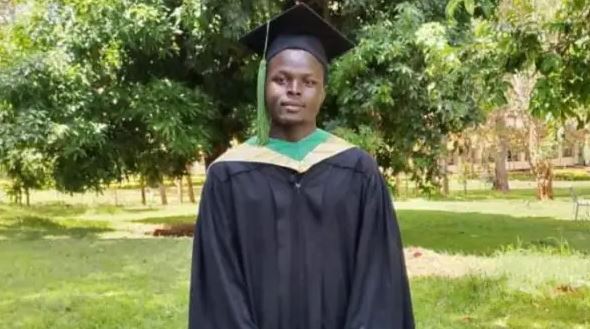 The lifeless body of a 23-year old fresh graduate identified as Elvis Kipkemei has been found in his room.

Kipkemei who has just graduated from Meru University, Kenya with a degree in Nursing is suspected to have been murdered before his body was brought silently to his room

“Kipkemei has been very friendly to many but it was shocking to have been found lying in his bed lifeless. He had injuries on the head, neck and hands. Besides his bed, there was unused acaricide and a blunt object.

“We suspect he was murdered elsewhere and dragged to the house,” Vincent Chirchir one of his cousins said.

Chirchir further said, prior to his death, some unknown people were seen asking for directions to their home while driving and interestingly, a day later Kipkemei’s body was found laying lifeless on the floor in his room

“We are getting reports that a certain vehicle was spotted on the way to Kismayu a small village within Mosobecho and within the area where they had parked drops of blood were seen after Elvis’ death,” Vincent added.

Kapsabet police officers have since begun investigations into the mysterious death of the graduate whose parents had great hope of helping the young siblings after being employed.

“Police took the body to Kapsabet county referral hospital mortuary and we believe we will get justice in establishing exactly what happened to our brother,” he noted.