Muslim-Muslim Ticket: CAN Tells Christians Ideal Candidate To Vote For In 2023


The new directive cited religious intolerance, involvement with drugs and links with Boko Haram as some of the red flags to look out for when deciding on their preferred presidential candidates 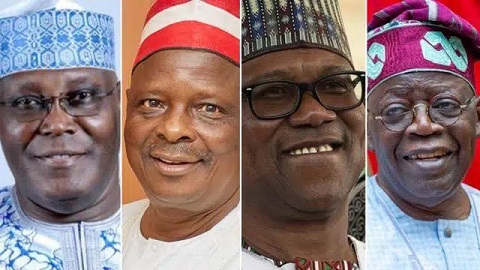 Ahead of the 2023 presidential election, the Christian Association of Nigeria has revealed the kind of candidate Christians should vote for in the 2023 presidential election.
According to TheWhistler, Sarah Omakwa, senior pastor of the Family Worship Centre, Abuja on Sunday read out the fresh directive by the Christian Association of Nigeria to churches in the country on the ideal candidate to vote in the 2023 presidential election.
The directive was made in reaction to the ruling All Progressive Congress’s decision to field Muslims as its presidential and vice-presidential candidates.
The new directive cited religious intolerance, involvement with drugs and links with Boko Haram as some of the red flags to look out for when deciding on their preferred presidential candidates
The directive was produced by the Political and Strategy Committee of the Christian Association of Nigeria, according to The Whistler.
CAN also advise that candidates should be voted based on character, competence, capacity and policies.
On character, CAN stated that the candidate must possess the following, “the fear of God, honesty and truthfulness, respect for the rule of law, justice and fairness for all, respect for religious and ethnic diversity, compassion and discipline, clean and credible lifestyle.”
Amid allegations of drug links to Tinubu, CAN stated that the candidate’s record must show ”no membership of cult, no involvement in drugs and witchcraft; no fanaticism, no relationship to Boko Haram or another violent religious group.”
On Competence, it urged Christians to look out for “Quality performance in previous positions, good education sufficient to manage a complex society, effective management of human and natural resources.”
As for policies, CAN advised the church to vote only for presidential candidates that support state police, restructuring, and ranching, among other things.
On policies, CAN further state, “State police, religious neutrality of the Nigerian state, enforcement of fundamental human rights of all Nigerians, restructuring to decentralize governance, equitable and enforceable sharing of executive offices, equal ethnic and religious representation in military and Security agencies, self-determination for all Nigerian people, no to ruga, yes to ranching, education and free healthcare to all Nigerians (including Almajiri), no open grazing (rather modernization of animal husbandry), local control of the local economy, including waters, rivers and forest.”
Top Stories