According to him, it finally dawned on him that the actress had truly died when her manager travelled to Warri to physically see her corpse.

Nigerian actor, Charles Inojie, has reacted to the painful demise of his colleague, Ada Ameh.

The actress was reported to have died on sunday the 17th of July 2022, at a hospital in Warri, Delta State, around 11pm.

Reacting to the news of her death, Charles Inojie said he delayed his reponse to her death because he needed to confirm it.

According to him, it finally dawned on him that the actress had truly died when her manager travelled to Warri to physically see her corpse.

Charles Inojie described Ada as a ‘rare gem’ while advising that everyone should celebrate her because she is an icon who puts smiles on people’s faces.

“It has taken a while to authenticate this sad news before going public under advisement from Ada’s manager who was on his way to Warri to secure physical confirmation of the horrible news that hit us all this morning. He has just called in from Warri and sadly he has confirmed our worst fears… Our beloved Emuakpor Johnson is no more!

It is with deep sense of loss, total submission to the will of God, that Native Media Tv, cast and crew of @theofficialthejohnsons painfully announce the passing of our dear sister, friend, colleague and Matriarch of The Johnsons clan Ada Obande Ameh (aka Emuakpor Johnson).

To all our teeming fans around the world, we have truly lost a rare and vibrant gem, but celebrate the life of an icon who daily put smiles on every face and spread love in every home. Together, we join our voices with yours to offer prayers on behalf of the family.

May God grant them the fortitude to bear this irreplaceable loss. ADA, You will be missed but your memory will live on in our hearts forever. We love you” 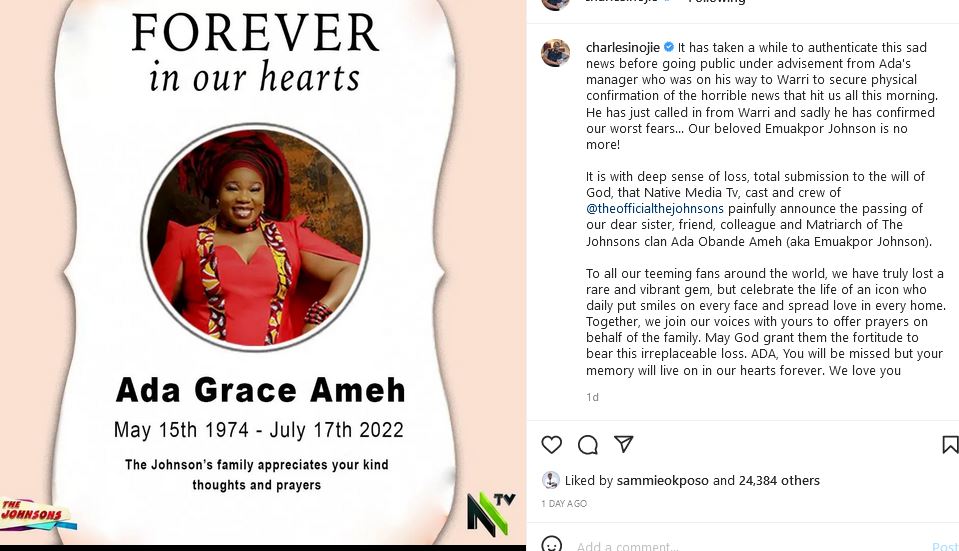