Two Weeks Is Too Long, Strike Can Be Over In Two Days – ASUU Slams Buhari


ASUU President, Professor Emmanuel Osodeke stated this on Tuesday while revealing what has made the strike linger for long. 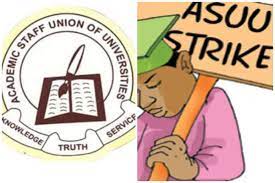 President Muhammadu Buhari has been slammed by the Academic Staff Union of Universities (ASUU) who said the strike can be ended in just two days instead of 2 weeks.
This came after Buhari gave a directive to his ministers saying they must resolve the strike in two weeks.
ASUU President, Professor Emmanuel Osodeke, speaking on Tuesday argued that it is the refusal of the government to sign the agreement between the two parties that has made the strike linger for long.
He stated that negotiations have been completed and all that is needed is for the government to commit to the agreement and all parties involved can sign it.
Speaking further, Osodeke argued that the strike has been allowed to linger because the children of government officials, politicians, and other powerful persons in the country do not attend public universities as they are all schooling outside the country.
He argued further during an interview appearance on Channels TV that the ASUU strike can be over in two days if the government does the needful.
Reacting to the directive given by President Muhammadu Buhari to the Minister of Education, Adamu Adamu to resolve the ASUU crisis within two weeks, Prof. Osodeke retorted that two weeks is too long to resolve an emergency.
He submitted that the government is sourcing money and spending on other issues, even those considered as frivolities but because they are not affected by the ongoing ASUU strike, the matter has been related to the back burner.
“Two weeks is too long. The issue of renegotiation has been completed by both sides, which means that one is gone. They should just come back to us and say ‘we have agreed, sign it’. That should not take two days,” he said.
“If you have a crisis in your house, you will source for money to resolve that crisis — the way they are sourcing for money to do all kinds of things.
“We were told they spent billions to feed children in schools. Is that correct? How many children have you seen being fed. They released N200 billion for entrepreneurship programme.
“Your universities are closed for five months, you did not release N100 billion, but you released money to share in villages because election is coming. It is the priority you place on education.”
The ASUU President stressed the need for the government to revitalize the education sector in the country as the amount Nigerians spend on getting foreign education is increasing by the day and fewer foreigners are showing interest in the country’s educational system.
“Government should prioritise education as number one priority in the country, because all of us here, wherever you are, you must pass through the school. Now that you have killed it, we are wasting our money on foreign countries.
“Last year, according to CBN, Nigerians spent N1.6 trillion as school fees to other countries. N1.6 trillion will turn around all the universities in Nigeria and bring them to standard and people will come from outside. We go outside; nobody comes in.
“For this strike, universities are shut down. Those who run the affairs of Nigeria – national assembly and executive arm – they do not have any problem. Their children are not here. If the children of all the ministers and senators are all in our public universities, this will not last two days.
“When the aviation people wanted to shut down, the national assembly called them immediately and settled them overnight because fear could not allow them pass through roads. They quickly resolved it,” he added.
Recall that the current ASUU strike commenced on February 14, 2022.
Top Stories