Footages of bishops dressed in cassocks who attended the event have flooded social media amid controversy surrounding the same faith ticket. 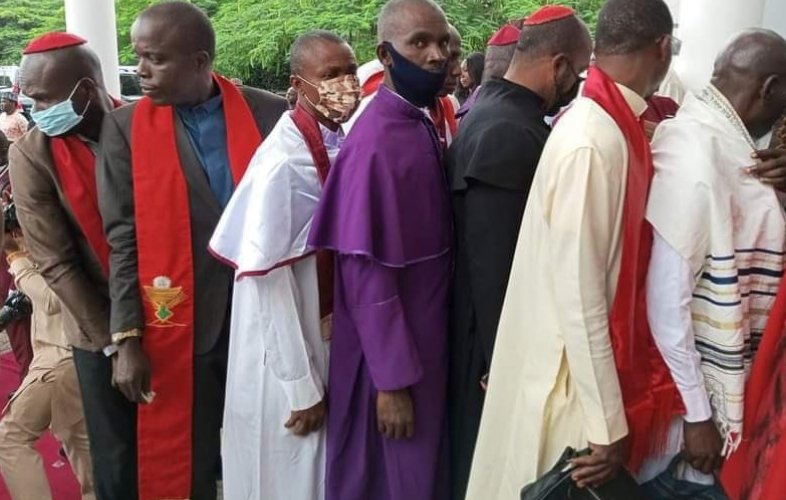 Some more facts on how the All Progressives Congress, APC reportedly hired Christian clergymen and women have emerged.

The APC reportedly hired the said clerics to participate in the unveiling of the party’s vice presidential candidate, Kashim Shettima.

Recall that Bola Tinubu, the APC presidential candidate, unveiled the former Borno State governor as his running mate on Wednesday in Abuja.

Footages of bishops dressed in cassocks who attended the event have flooded the social media amid controversy surrounding the same faith ticket.

DAILY POST reports that the ruling party is currently receiving backlashes from Nigerians for reportedly hiring fake bishops in a bid to claim support of the Christian community in the presidential race.

One of the ‘bishops’ who spoke with Peoples Gazette, Joseph Odaudu alleged that they were hired from a motor park.

According to him, the APC members promised to pay them N100,000 each.

“They came to meet us at the car park behind Eagle Square and they promised to give me N100,000. They bought food for us and took us to another place where they gave us clothes to dress like Christian leaders and reverend fathers,” Mr Odaudu told The Gazette.

“I am a Christian and I am supporting Tinubu but I hate when people lie and fail to deliver on their promises,” he added.

However, the Tinubu Campaign Organisation, TCO, had debunked the reports of fake bishops, saying they are clerics without big names.

TCO, in a statement by its Director of Media and Communication, Mr. Bayo Onanuga declared that the bishops were not hired.