The Moles Of Terrorists In Security Forces Behind Prison Breaks


The bloody attack was even said to have been foretold. But as usual, the governments as well as the security agencies neither heeded the alerts nor took any proactive measures. 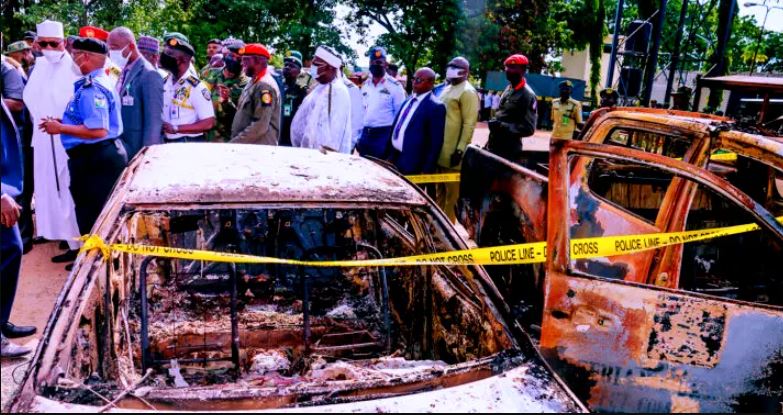 Nigerians were rudely shocked when terrorists attacked the popular Kuje prison in Abuja.

Apparently, the attack, a few weeks ago, on the Kuje prison, Abuja, has wiped any unabating doubt that fifth columnists are active in Nigeria’s security architecture.

In the dastardly nighttime assault, the terrorists who were armed with explosives and automatic weapons shattered the gates of the prison without any resistance, freely opened fire on anyone who tried to struggle with them before taking charge of the facility for more than two hours.

When the dust cleared, the scene was a mess, the blood of the five persons slain by the terrorists was splattered all over the ground while more than 800 inmates were allowed to escape from custody.

Most of the security operatives on duty that fateful day could not muster the will to either put up a fight, deploy the cache of assorted arms in the armoury, or apply any of the effective strategies acquired through their rigorous training sessions.

The bloody attack was even said to have been foretold. But as usual, the governments as well as the security agencies neither heeded the alerts nor took any proactive measures.

For some observers, the Kuje attack and many other terror acts such as the Kaduna train bombing where the terrorists enjoyed maximum liberty ceded to them by the boots on the ground support the recent admission by the Chief of Defence Staff, Gen. Lucky Irabor, that a group of secret supporters of the ‘Enemies of the State’ has infiltrated the nation’s security architecture, and are engaged in espionage and sabotage within the defense lines.

According to some analysts who spoke with Saturday Vanguard, ‘inside action’ on the part of the security operatives has continued to aid the terrorists, pertinently with immediate or potential impact on the general operations of troops.

While deploring the perceived treachery and culpability of some operatives who have been deployed to guard critical institutions such as prisons, the Executive Director of the Resource Centre for Human Rights and Civic Education (CHRICED), Dr Zikirullahi Ibrahim, in an exclusive chat with Our Correspondent, said: “I absolutely agree that there’s fifth columnists and moles in Nigeria’s Security system. The Kuje prison break is just the latest in the series of compromise and betrayal suffered by the nation.

“It’s in good knowledge that several military outfits/commands, including the Nigeria Defence Academy (NDA) have been invaded with huge human and material losses, which would not have been possible without betrayal.

“What about the train and Kaduna International Airport attack?,” he queried.

To win the war against terrorism and bring it to a permanent close, the rights activist submitted that uprooting traitors and cleansing the security agencies of betrayers should be a major plank of the strategy.

Ibrahim said, “Solution can only be achieved if there is the political will to overhaul our security architecture. This can only be done through radical approach. That is dissolution of security high command, including the police by showing the security merchants the way out.

“Secondly, there’s also the need for total clean up of the rank and file so that those that bribed their way in, or were recruited through back doors such as the sons of big politicians, Emirs, Obas and retired military generals will no longer be in a position to compromise our security.”

Like Ibrahim, other observers are strong on the allegation of collusion by insiders within the security system; noting that diverse media platforms have reported these accusations over the years with little or no evidence that the authorities are taking them seriously.

The country is bleeding and paying dearly for this laxity and intelligence failure. Apart from the inmates that died during the attack on the Kuje custodial centre, one personnel of the Nigeria Security and Civil Defence Corps (NSCDC) identified as Iliyasu was killed.

Reliable sources at the Kuje Custodial Centre have said that the actions of traitors could have led to the death of the gallant officer who was abandoned on his beat (at the main entrance) by his colleagues the fateful night that terrorists stormed the prison to set free their comrades who have been in detention.

For a country fighting insurgency and various forms of criminality on all fronts, the avoidable loss of its security personnel should not be allowed to continue.

Speaking also, the Executive Director of Adopt-A-Goal Initiative, Ariyo Dare-Atoye, said beyond condemning the terrorist attack on the Kuje custodial centre, the relevant authorities, must without delay take very strong, effective steps to unmask the enemies within.

According to him, the security agencies cannot fight the terrorists successfully, if there are collaborators from within.

He told Saturday Vanguard, “The entire Nigerian security architecture has been infiltrated by terrorist sympathisers, while their agents have moved higher up the ladder thereby giving the terrorist access to exclusive security information and movements.

“In essence, the issue of collusion or insider betrayal leading to attacks of prison formations or even the regular ambushing of our security officials will always be a matter of when, for these terrorists.

“President Buhari appears not to have taken serious action against attacks on the prisons. Government has not arrested and prosecuted these terrorists and their sponsors.

“It will take a lot of internal monitoring, investigation and cleansing in our security and intelligence system to have any significant chance of weeding out the moles in the system.”

Recall that the twilight of his administration, former President Goodluck Jonathan raised the alarm that Boko Haram had infiltrated his government.

Similarly, before the end of President Buhari’s first term, a former Minister of Defence, General Theophilus Danjuma (Rtd), also accused the security agencies of not being decisive and brutal against terrorism.

According to Comrade Deji Adeyanju, the convener of a civil society group, Concerned Nigerians, these past alarms have become instructive at this time.

He, therefore, stated that the dragnet should also seek to draw in government officials at all levels and other sympathisers within the intelligence services who are enamoured by the perverse ideology of terrorists, and so are betraying the country solely for pecuniary reasons.

“The state of insecurity in the country is the worst since independence because even during the Nigerian civil war, we didn’t have a situation where sensitive government installations like the custodial centre in the country’s capital city was infiltrated and suspected terrorists were released without any challenge by the security agencies.

“These terrorists have annexed almost every region of the country, save the South-South region. So, it is my belief that for most of these terror acts such as the attack on the Kuje prison to have been successfully carried out, terrorists’ moles working for government agencies have hands in it.

“Ex-president Goodluck Jonathan and former Defence Minister, Theophilus Danjuma, have alleged that there is collusion by the armed forces because they appear not to be neutral.

“There’s no way terrorists can invade the Kuje custodial centre that has a standing battalion 187 right beside the facility for over two hours without preventing either their entry or exit. It is almost as though some people were working for hand with the terrorists in the country.

“In my view, this is even worse than the infiltration alarm that was raised before the attack. So, it appears that some people are working with the terror gangs. It is a sad reality. However, this is what it looks like.

“It also appears that there is indeed an agreement between some officials and the terrorists, because how else do you justify a situation where just a few days after the Kuje prison was attacked and those in custody freed, the terrorists began to release victims of the Kaduna train attack? It looks all planned, and there seems to be a bigger agenda here,” he told Saturday Vanguard.

Meanwhile, allegations have also been rife that traditional rulers and community heads were also colluding with the terrorists, especially in the North-West.

Nevertheless, the Zamfara State Government has unmasked some culprits in this regard, but the investigation should be extensive and thorough.

Civil society groups are unanimous in the advice that rather than being fixated on regime protection and harassing journalists, protesters, and other peaceful agitators, the intelligence agencies should reform from within its ranks, respond to the country’s peculiar security threats and effectively lead the fight against insecurity.

Also, Nigeria should learn from other countries. Culprits should be swiftly prosecuted. For instance, in North American countries, treason attracts death sentences or imprisonment of not less than five years with a fine of not less than $10,000.

In the same vein, the punishment for collaborating with the enemy in the United Kingdom is life imprisonment.

Nigeria must show seriousness by fishing out these traitors and making a very harsh examples of them.