Chikamnanayo stated that his uncle, Oluchukwu and his wife Ebere, usually starve him and on some days feed him once a day. 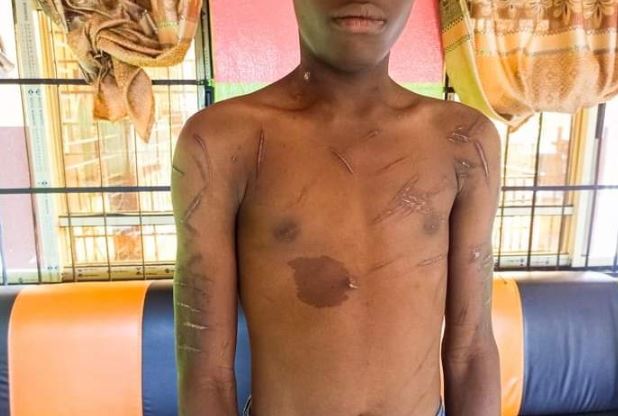 A 17-year-old boy has been rescued from his abusive guardians by the Anambra State Commissioner for Women’s Affairs and Children’s Welfare, Mrs Ify Obinabo.

Obinabo rescued the boy, after some individuals, he contacted about his plight brought him to Awka from Onitsha.

The boy identified as Chikamnanyo Olisaemeka who hails from Nnewi explained that his mother handed him over to his uncle in February this year, but since then his life hasn’t been the same.

Chikamnanayo stated that his uncle, Oluchukwu and his wife Ebere, usually starve him and on some days feeds him once a day.

“I have not been enrolled in any school since I came to Onitsha in February. My auntie, Ebere has the habit of beating me with sharp objects at the slightest provocation.”

Explaining the marks on his body,  Chikamnayo said that it has become a norm for him to be severely punished with a heated electric iron when he does anything wrong.

Obinabo who spoke to journalists said Chikamnayo’s guardians would be charged to court and that  boy has also been sent to an undisclosed hospital for medical attention. medical treatment.