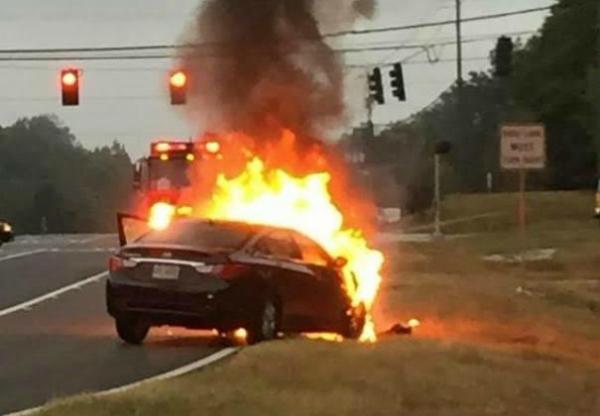 The man was on Wednesday burnt to death in Ilorin, Kwara State capital.

According to the spokesman of the State Fire Service, Hassan Adekunle, in Ilorin on Thursday, the car exploded and the victim was burnt to death at the main gate of the Softfort Table Water, situated at Block 2, Obanisuwa Agbejila, along Airport Road, in Ilorin, Kwara State.

“However, firemen were able to retrieve the casualty from the motorcar on time and gave the body to the manager of the water factory named Mr. Surajudeen (the victim’s boss).

“The driver was coming back from a filling station and fully rolled up inside the car, forgetting that he carried 3 gallons of 30 liters of petrol.

“On getting to the factory gate, the petrol suddenly exploded, thereby causing the fire incident.

“The victim’s name was Emmanuel and the cause of the incident was due to lack of proper ventilation in the car,” Hassan disclosed.

The Director, Kwara State Fire Service, Prince Falade John Olumuyiwa, sympathized with the family of the victim over the irreparable loss.

He also urged the general public to take safety measures as paramount, especially whenever they were performing their day-to-day activities, in order to protect their lives and property.