Azizul Rayhan was scared the elevator would plummet or he would run out of air and suffocate during his seven hours inside. 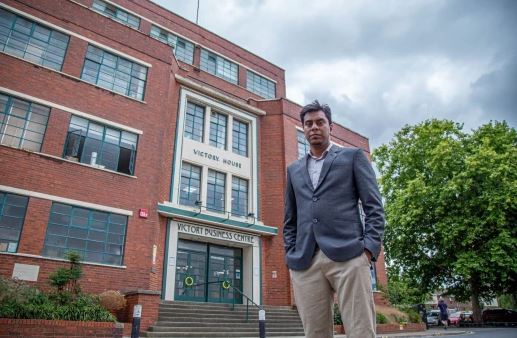 The story has been told of a man who got trapped inside an elevator.

The man identified as Azizul Rayhan, was trapped inside a lift all night feared and he may die after no one answered his screams for help.

Azizul Rayhan was scared the elevator would plummet or he would run out of air and suffocate during his seven hours inside.

He became so panicked, he thought he couldn’t breathe at one point in Victory Business Centre in Portsmouth.

The ‘horrible experience’ unravelled when he went to collect belongings from his brother’s office on July 17.

When he got in the lift and pressed the ground floor button around 10.45pm, it moved a little but then shuddered to a halt and shook.

The 27-year-old, who works as a paralegal, said he pushed the emergency button in the hope someone would come to his aid, but no one arrived.

‘I thought the wires had severed or cut down, and I was going to fall down’, he said.

’I thought something bad would happen to me, like I might even die, because I did not know if there was enough oxygen in there.

‘If it [the emergency button] worked, I would have been out of there in 30 minutes or so.

‘I was screaming the whole night for help, but no-one was around.’

Azizul used his keys to prise open the first lift door, but couldn’t use the same trick to open the second heavier one and escape.

He was finally rescued at 5.45am the next day by a business centre employee.

The experience has left him shaken and he has been referred to therapy after telling his GP he believes he has developed claustrophobia.

‘I was still shaking when I was rescued’, he said. ‘I couldn’t talk for 30 minutes afterwards. It was the most horrible night of my life and my mental suffering is indescribable.’

Portsmouth City Council has apologised to Azizul, saying both the mechanism and phone alert system had developed faults.

This is despite it being checked every two months – most recently in June.

A spokesperson said: ‘We fully understand what an awful experience this must have been for this gentleman and have every sympathy with him.

‘The lift malfunctioned and no phone alert was triggered when the gentleman pressed the alarm button.

‘An alarm did ring on-site. The business centre is open 24 hours, but no-one was around to hear this.

‘We hire a security company to make routine visits every night between midnight and 3am. The on-site alarm would normally have been heard by their security guard.

‘The guard failed to make the scheduled visit. We’re urgently undertaking a full review of our contract with the company.’