The embattled police man has said contrary to insinuations in some quarters, he has never met Onuorah Caritas Onyinye or collected money from any drug baron in his life. 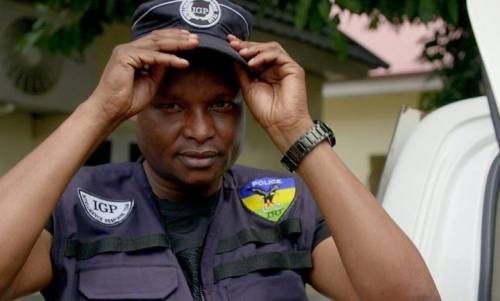 DCP Abba Kyaria, the suspended Deputy Commissioner of Police, has spoken up about some allegations against him.

The embattled police man has said contrary to insinuations in some quarters, he has never met Onuorah Caritas Onyinye or collected money from any drug baron in his life.

“We feel compelled to react to the false news being peddled by some section of the media because of the personality involved,” Kyari said in a statement obtained Thursday by his lawyer,Barr. Suleiman Usman.

“Reports by a cash-and-carry news website, Sahara Reporters and an unknown paper, SpyNigeria.NG that one Onuorah Caritas Onyinye, who was arrested few days ago for drug related offences ‘was giving Abba kyari money” without any evidence or any link between them was nothing but malicious fake news aimed at tarnishing the image of DCP Abba Kyari,” the lawyer said in the statement.

He said: ”As usual, these fake news pedlars latched on to news that have nothing to do with Abba Kyari because of vested interest in their bid to have something to write.”

“For the record, DCP Abba Kyari has never met or spoken to anyone called Onuorah Caritas Onyinye neither has he seen her before the latest development. They should put her on national television to talk if what they are saying is true,” he challenged.

Noting that,”NDLEA and customs officers are the ones who man the airports in Nigeria”, the lawyer wondered why: ”It is strange that somebody like Onyinye will pay DCP Abba kyari who does not have anybody in the airports to help her pass with drugs.”

“The real drug traffickers who implicated operatives of the NDLEA in Enugu Airport that they were collecting money from them did not hide the drugs they came into the country with. Rather, the heavy drugs they usually come in with, like in the case of the two drug traffickers that were arrested by IRT on January 19 2022 at Enugu Airport, that came from Brazil through Ethiopian Airline had their bags full with drugs and conspicuously carried these bags since they had settled the NDLEA officers,” the statement read.

“The drug traffickers said they did not need to hide their drugs as they had paid the usual 10 million Naira per 20kg to the NDLEA officers in Enugu Airport based on their written confessions which was also corroborated by the contained of their video confessions which tapes are public domain.

“The drug traffickers arrested by IRT and handed over to NDLEA in January 2022 mentioned the names, addresses and phone numbers to the NDLEA authorities of the 4 Main Drug barons sponsoring them and other Drug traffickers using the Enugu Airport.

” These two voluntarily confessed that the four drug barons mentioned are responsibled for bringing in over 200kg of drugs to Nigeria everyday that Ethiopian airline lands in Enugu Airport, unfortunately, these Drug Barons and kingpins were still not arrested or declared wanted by the NDLEA.

“Also the NDLEA officers in Enugu Airport clearly indicted by the drug traffickers arrested by IRT and transferred to NDLEA are all free today,

“The media is also induced to be silent about the involvement of the NDLEA officers in Enugu Airport who makes over 200 million Naira from drug traffickers coming from each Ethiopian airline that lands in Enugu Airport, while the police officers who arrested the drug traffickers cleared by NDLEA in Enugu Airport are being persecuted by the NDLEA for allegedly tampering with some of the drugs they recovered, all to cover up the activities of their officers and hundreds of millions they get from the major frug barons using the airport.

“People like Onuorah Cartas Onyinye hiding less than 3kg of cocaine are not the customers of the NDLEA officers who do deals with major Drug Barons that send upto 20 of their boys each bringing atleast 20kg of Drugs arranged conspicuously in their carry On bags.

“Abba kyari has never collected one kobo from any drug dealer or drug baron in Nigeria. We challenge any drug Suspect that Abba kyari collected (any) money from, to come forward or be put on national television to talk instead of writing false stories that are credited to “sources” which are fake, nothing but fake news.

“All these falsehood cannot change the destiny of Abba kyari despite repeated attempts by Sahara Reporters and their co-travellers to mislead the public. He will surely reach where GOD has destined him to be no matter their efforts.

“The public should disregard such fake news that are always coming from Sahara reporters and some few online medias that are sponsored by enemies of Nigeria,” the statement said.