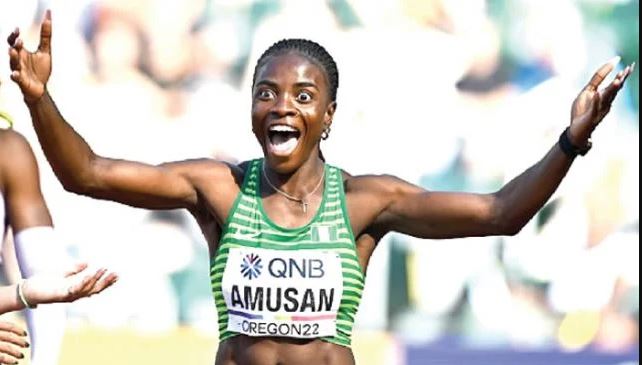 Kehinde Amusan, the father of Nigerian hurdler and world champion, Tobi Amusan, has spoken about her early days and how he raised her.

In this interview, he tells JOHNNY EDWARD he never supported the athlete in the early stages, his dream job for her and how paucity of funds almost thwarted her dreams of becoming a world-class athlete.

How would you describe watching your daughter Tobi break the world record in the 100m hurdles event last Sunday in Oregon, United States?

I felt so much pride watching her coast to victory. You know, as a parent, when you see your children succeeding, it makes you delighted, given the hard work and efforts put into raising them. I believe it was just the mercy of God, because as a parent when you have a child who succeeds, you will give all the glory back to God. We are so overwhelmed and we want to thank everyone both here and abroad that supported her in attaining this great feat.

How did you celebrate her success?

I celebrated her victory in my own little way. You know how Nigerians are, so many family friends and neigbours came around that early morning to join us in the celebration. We prayed, sang and gave all the glory to Almighty God. Our well-wishers also came around to share in our joy.

What was going through your mind before and during the final race?

As a family, we were following her races, including when she initially set a new African record of 12.40secs. Many of our neigbours also followed the race and kept discussing it with me when we spoke on the phone. They believed she would win a medal, but not many people thought she could win gold, let alone shatter the existing record. In the final, I just kept my focus on the race. As a family, we continued praying for her, and when she won, I was so happy. My joy knew no bounds.

Before now, a number of Nigerian parents weren’t disposed to supporting their kids go into sports. Did you and your wife stop Tobi from sports?

In the beginning, I didn’t really support her, though her mother took to sports during her school days. She was an athlete as well, while I’m a football lover. I played football, but I think she took after the interest we had in sports, particularly athletics, due to her mother’s interest. You know, parents will always want their children to stay focused on education because of the manner in which sports are administered in Nigeria. With that in mind, we initially didn’t support her because we believed someone who was good in the sciences should become either a doctor or a nurse and not a sportsperson. But along the line, when some people saw that she had talent, they took interest in her. In the end, we supported her and as God would have it, when we saw that she had the talent, as given to her by God, we decided to leave it all to God and now, here is the success story.

She recalled in an interview that at the start of her career you burnt her sports gear in a bid to discourage her from sports. Why did you do that?

That’s what I’m trying to tell you. When I said I wanted her to face her education, it was because we knew what sports in Nigeria was at that time and we didn’t know what she would gain from being an athlete or going after games, instead of facing her education. At that point, I didn’t know she had been going for training because each time I asked her mother about her whereabouts, her response was always ‘I’m sorry, I ought to have told you, she left for the church, and at that time she was part of the choir. Subsequently, when I was not too convinced, I decided to monitor her, and interestingly, I found out that she used to go to the stadium for training and I said ‘No, that is not my plan for you.’ I wanted her to be focused on education. You can’t do two things at the same time. It’s either you focus on education or you focus on sports, but as a father, I didn’t want her to go into sports. I told her, ‘Focus on what you said you wanted to study, which is medicine.’ At the end of it, when I got to know that she was more interested in sports than what I wanted her to do, I took two of her training kits and burnt them. I wanted to discourage her from going into sports. She screamed, ‘Ha, Daddy, you burnt my clothes.’ And I told her I wanted her to be focused on what I wanted her to be. But when people came and intervened; that I should allow her to continue focusing on her God-given talent, I said no problem. Since then, I gave her all the support I could and even encouraged her to go for training. Sincerely, it was hard to take that decision at that time, but that was how it all started. As a teacher with a meagre salary, we struggled to feed and pay school fees. It was not easy. We usually gathered whatever we had to support her. Her mother did a lot for her. Before I could help, her mother would have done it almost all the time. We did all we could to help her career in sports. While I was growing up, no one cheered me when I played football. We saved our pocket money to buy our trainers and jerseys. We could only afford second-hand clothes back then. That was why I did not want her to go through the struggles of putting in all her efforts and not getting rewards for it. In truth, I told her to shun athletics because it was very tough taking care of the family then. So, adding an extra burden made it more difficult.

What sort of kid was Tobi while growing up?

Tobi was a very focused child, sincerely. Once she plans to achieve a goal, she gives it her best, because she also knows that her parents won’t allow her to settle for less. That’s because gradually, we showed significant interest in the things she wanted to do. In the end, we gave her all the support because we knew she was focused on her goal of becoming a top athlete.

We learnt she gained admission into Tai Solarin University of Education to study Human Kinetics before she received a scholarship to attend the University of Texas at El Paso, where she met Lacena Golding-Clarke?

Yes, initially she had the intention of going to top tertiary institutions in the South West like the University of Ibadan or Obafemi Awolowo University, Ile Ife, but when the Joint Admissions and Matriculation Board denied her a chance to gain admission twice, as parents, we sat her down to advise her to put her faith in her God-given gift. At that time, we could not afford to send her to Ogun State University (now Olabisi Onabanjo University, Ago-Iwoye), so we opted for Tai Solarin University in Ijebu Ode, where she was admitted to study Human Kinetics. She accepted her fate and decided to go but in her first or second semester, if I remember very well, the option of traveling abroad through a scholarship came up and that was how her journey overseas started.

Would you say she took after you or more after her mother, who was also into athletics?

I was a footballer and her mother was an athlete; she used to run during her secondary school days, she is from Ogere Remo. I would say she took after her mother because she used to be one of her school’s top athletes too.

Is Tobi your only child who took to sports in the family?

Yes, she is and she is the last child of the family. The other children didn’t love sports that much. Though they watched football and other sports, they are not really into sporting activities.

She had several near misses at the Olympics and at the World Championships, finishing fourth on those occasions. As a father, how did you feel during those periods?

When she had those near misses, as parents we were not happy. We wanted our child to become a champion. We did our part as parents; we prayed and encouraged her during those times she finished fourth at the previous World Athletics Championships in Doha and at the Olympics. We consoled her but encouraged her to look on the bright side and not dwell on the near misses because the downfall of a man is not the end of the world. When tension rises, as a parent, you have to encourage your wards to give their best. That we did. Every time she called us to check on our well-being. You win sometimes and sometimes you lose. When you win you’ll be happy and when you lose you become sober. To God be the glory. That was one of the things that made us support her.

The Commonwealth Games starts in a few days, what are your expectations?

Of course, I believe she can replicate her feat. I trust her to stay focused like she has always been.