The incident happened on 11 July 2022, following a torrential downpour in parts of Calabar. It had uprooted trees, and one of such trees fell on Ndifreke’s house. 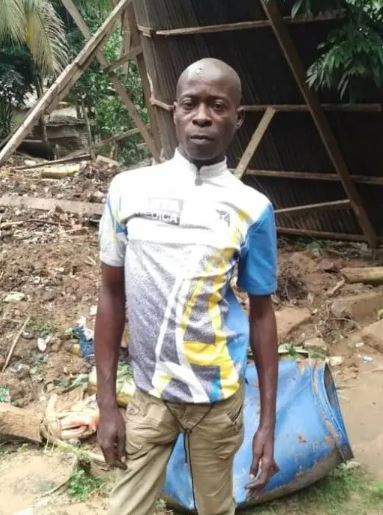 He lost his four kids in one fell swoop when flood submerged his ramshackle home. The other two who escaped are still in hospital recuperating.

The incident happened on 11 July 2022, following torrential downpour in parts of Calabar.  It had uprooted trees, and one of such trees fell on Ndifreke’s house.

Daily Trust Saturday spoke with him recently where he narrated his ordeal, trauma and emotional effects of having to lose his beloved children.

Ndifreke, a middle-aged man, is originally from Akwa Ibom State. He has been physically challenged since childhood due to an ailment. He survives with his family on menial tasks and petty trading in the neighbourhood.

He said he has lived in Okangbang community, which is erosion prone, for several years.

According to him, the heavy downpour led to flooding which ran through the densely populated neighbourhood forcefully.

His four children, whose ages range from five to 12 were inside the house eating when the flood came and they could not quickly escape.

“The other two, who were not within close range to the first four, sustained various degrees of injuries from the impact of the devastation. They were admitted in hospital.

“I did not take even a pin from the house when the flood swept it away. That’s not even important compared to my children who I have suffered for many years to bring up.

“I have no money. I have not been working. I thank God that the state government has heard about it and they came to sympathize with me. They have promised to defray the medical costs.

“I want to appeal for more public supports. I need a house. I need a job. I need food to give to these two. I have not been able to get myself together since the incident.”

Confirming that Ndifreke has been grieving and emotional down, chairman of the community, Mr Asanga Donatus, appealed for moral and financial supports for him.

He said community members rose to assist him when the incident happened.

He appealed to the government to help them work on the erosion problems, saying they do not know whose turn it will be next.

“The condition of our neighbourhood is really precarious and needs swift government intervention to avert further collapse of houses and loss of lives,” he stressed.

Few days ago, some dignitaries and government officials visited Ndifreke.

When director general of the State Primary Healthcare Development Agency, Dr Janet Ekpenyong, visited, she broke down emotionally over the loss of the children.

She donated medical and other relief items to Ndifreke’s family. Ekpenyong said the loss was one of the most devastating news that hit her in recent times.

She promised good medical attention to the survivors at the state General Hospital Calabar, assuring that their welfare will be treated as priority.

“This is a very sad news to behold. It’s not easy to lose a loved one let alone having four killed in one day.

“The governor and his dear wife, Senator Ben and Dr Linda Ayade, sent me to visit the family, provide both medical and welfare supports and to see that the two surviving kids are doing well and responding to treatment.”

The government promised to defray all medical expenses and ensure that their house is rebuild.