Sotheby’s said the ancient skeleton, which was discovered in the US state of Montana in 2018, sold for just under $6.07m as part of its natural history auction on Thursday. 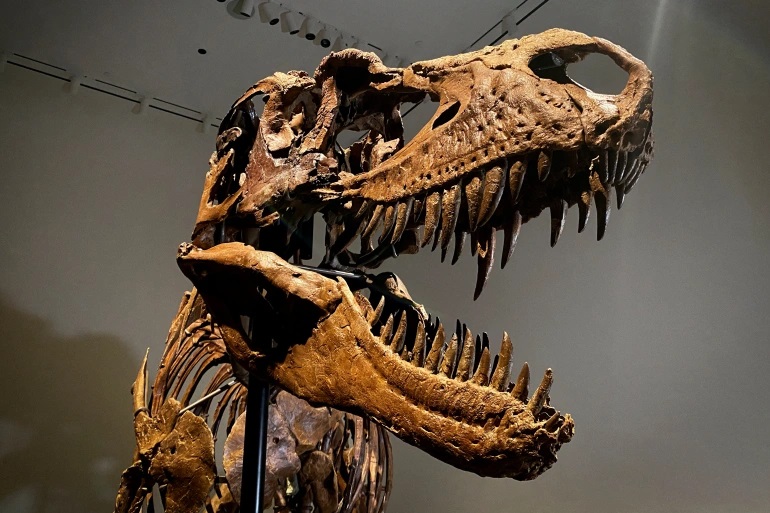 An ancient skeleton of a dinosaur has sold for over $6 millon.
The skeleton is that of a gorgosaurus, a dinosaur relative of tyrannosaurus rex that lived approximately 77 million years ago.
Sotheby said the ancient skeleton, which was discovered in the US state of Montana in 2018, sold for just under $6.07m as part of its natural history auction on Thursday.
It is only one of 20 known gorgosaurus specimens, Sotheby’s said on its website, and the only one known to be available for private ownership. Most of the other specimens were found in Canada, which has strict export rules prohibiting private sales.
The auction house did not say who purchased the skeleton, which measures nearly 3m (10 feet) tall and just under 6.7m (22 feet) long.
The gorgosaurus, whose name means “dreadful lizard”, lived approximately 77 million years ago in what is now the western region of North America, Sotheby’s said.
But the sale has angered scientists, who say allowing dinosaur specimens to be sold to private buyers could hurt their ability to study them.
“There are not very many specimens of gorgosaurus. All the others are in museums. And one more being sold, you might say, ‘Oh well it’s only one.’ But if there’s only a few, that’s a lot of information that we lose,” said Jessica Theodor, president of the Society of Vertebrate Paleontology.
“You have no guarantee that whoever buys it is going to allow access to scientists,” Theodor told Al Jazeera.
Top Stories