Wike had last week Friday described a recent interview conducted by Abati and Tundun Abiola with Atiku as one filled with lies. 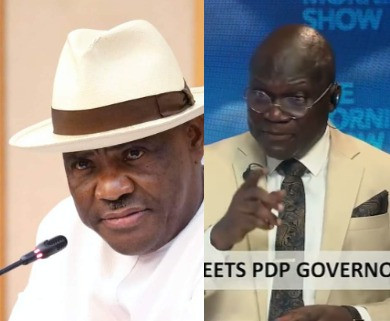 Veteran journalist, Reuben Abati has lashed out at Governor Nyesom Wike of Rivers state after he questioned his ability as a journalist.
Recall that last week Friday, Governor Wike addressed newsmen at the Port Harcourt International Airport where he described the recent interview conducted by Abati and Tundun Abiola with Atiku as one filled with lies.
While speaking, Governor Wike berated Abati and said he wondered why media practitioners no longer engage in investigative journalism. According to him, he listens to and reads some of the things Abati says and writes and he begins to wonder where Nigeria is heading.
This morning, Abati took out time while on Arise TV to reply the governor. He said he doesn't know where Governor Wike was when he started the profession many years ago and that the Governor does not have the capacity and intellect to teach him journalism.
Watch a video of him speaking below: