2023: Apostle Chibuzor Endorses Peter Obi For Presidency, Tells Nigerians To Vote For Him


The cleric in a post on his Facebook account described Obi as the best man for the award, adding that he is the Moses God has sent to rescue Nigeria. 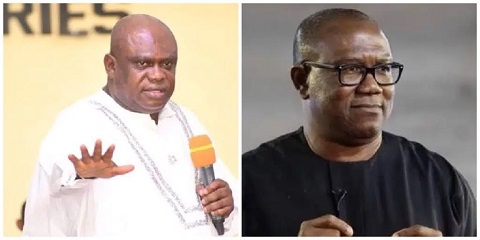 The General overseer of the Omega Power Ministries, Apostle Chibuzor Gift Chinyere has endorsed Peter Obi, the presidential candidate of Labour Party for President.
This was revealed in a statement he made on Monday on Facebook after being nominated for an award.
Instead of contesting for the award, he described Obi as the best man for the award, adding that he is the Moses God has sent to rescue Nigeria.
The cleric, who noted that he is not currently in Nigeria, promised to reveal why Obi is the man sent by God when he returns to the country.
He called on Nigerians to cast their votes for Obi in the forthcoming presidential election.
Apostle Chinyere wrote, “He is the Moses that has been sent to rescue Nigeria.
“As soon as I come to Nigeria from my vacation, I will give you more reasons about our GOD sent Moses, Mr Peter obi.
“So today 2 August 2022, I am casting my vote to His Excellency Peter obi. (Mr integrity).
“And I will advise others that love our dear nation to do the same. Thank you and God bless everyone.”
Apostle Chinyere is known for his philanthropic deeds. He has supported the likes of Nollywood actor, Kenneth Aguba, the family of Deborah Samuel who was killed over alleged blasphemy and several others.
Top Stories