According to the minor, she was constantly abused, starved and forced to sleep outside the house by the woman. 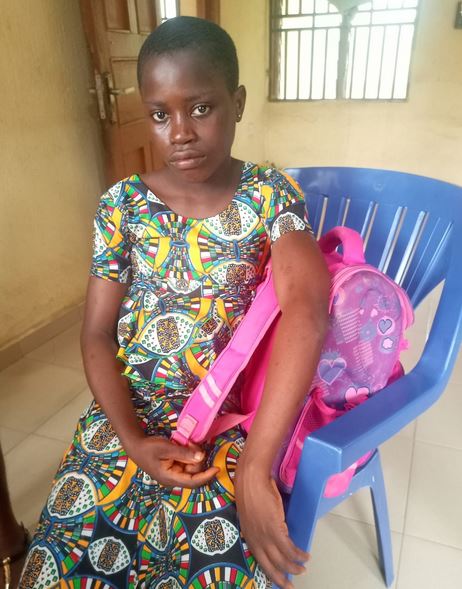 A 10-year-old girl who identified herself as Ebube Ezaka has been rescued by a good samaritan who spotted her roaming the streets of Abakaliki, Ebonyi State on Friday, August 4.

The chairman of Human Rights Defenders (HURIDE), Sampson Oko Nweke, who disclosed this on Facebook said the girl ran away from her mistress due to alleged constant abuse.

According to the minor, she was constantly abused, starved and forced to sleep outside the house by the woman identified simply as Mrs Chimuanya.

"This girl child is from Ofinakpa Village, Echara community of Ikwo LGA, Ebonyi State. She said she is 10yrs. She gave her name as Ebube Ezaka; her father's name as Matthew Ezaka and her mother, Ndidi. She doesn't know the name of her Street in Abakaliki here neither she know the name of her church.

However, a good citizen saw her this afternoon aimlessly roaming the streets of Abakaliki. He contacted HURIDE and HURIDE swiftly went for her rescue and safekeeping. The little girl was tired and frustrated owing to the Wickedness of her aunty. That's why she decided to leave the house even if she could die in the process

She told HURIDE that she was living with her grandmother in the village before she gave her out early this year as a maid to one Mrs Chimuanya from same Ikwo but resides in Abakaliki. She told HURIDE her ugly experiences with Mrs Chimuanya. Mostimes, she goes to bed in empty stomach. Sometimes, she will be chased away and allowed to sleep outside. She also received floggings with koboko from her aunty every evening.

Meanwhile, HURIDE in collaboration with the NHRC has made wide outreach to see if we can get anyone from the family of the poor child. Fortunately, though, some members of the public have indicated to be of help to locate the child's family while we continue to look for Mrs Chimuanya, her Abakaliki guardian.

N/B: Parents should be wary in who they send their children to live with. Most women today are so wicked that they treat other people's children the way they won't want theirs treated.'' 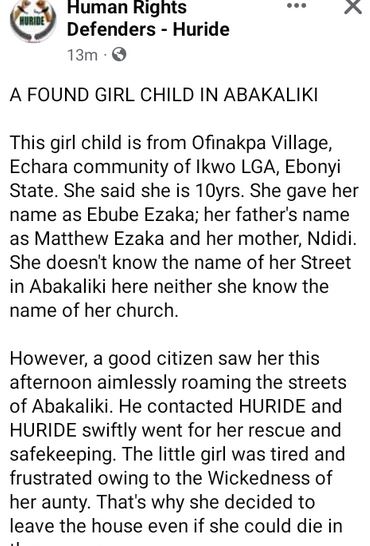 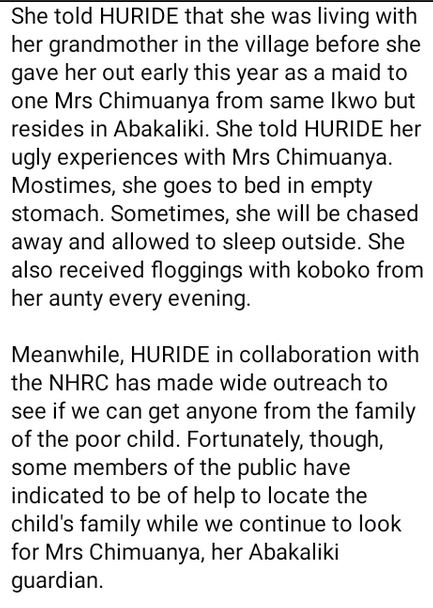 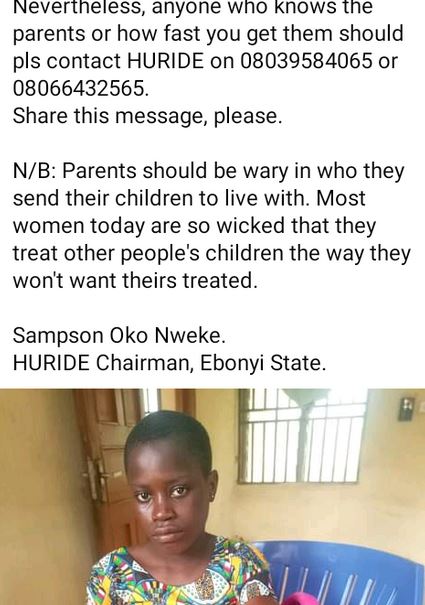