During a state held trial in Gerogia, Travis McMichael, the young man responsible for fatally shooting Arbery, and his father, Greg McMichael, had already been sentenced to life in prison without parole for their roles in the killing. 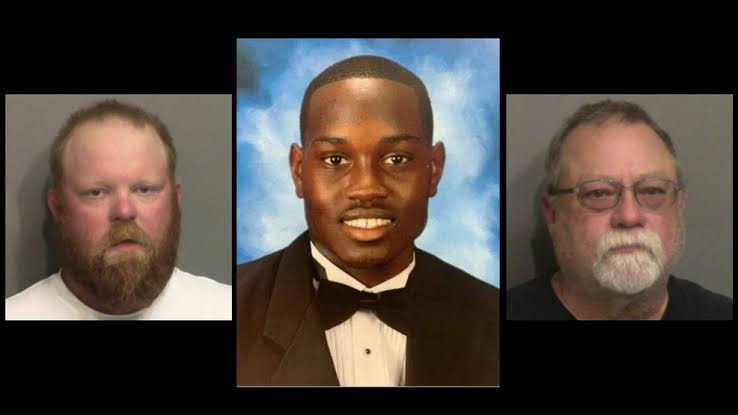 A court in the United States has sentenced two of the three white men who chased and killed Ahmaud Arbery to life in prison.
Arbery was killed as he jogged through a Georgia neighborhood in early 2020.
The duo were sentenced to life in prison on Monday, August 8 for federal hate crimes.
During a state held trial in Gerogia, Travis McMichael, the young man responsible for fatally shooting Arbery, and his father, Greg McMichael, had already been sentenced to life in prison without parole for their roles in the killing.
Then Months after, the McMichaels and their neighbor, William "Roddie" Bryan, each received life sentences for murder in state court.
But on Monday,  all three men convicted in Arbery's murder faced a second round of criminal penalties for federal hate crimes committed in the deadly pursuit of the 25-year-old Black Arbery.
U.S. District Court Judge Lisa Godbey Wood scheduled back-to-back hearings to individually sentence each of the defendants, starting with Travis McMichael, who fired a shotgun at Arbery after the street chase initiated by his father and joined by Bryan.
Arbery's killing on Feb. 23, 2020, became was one of the initiators of  racial injustice protests amid killings of unarmed Black people including George Floyd in Minneapolis and Breonna Taylor in Kentucky. Those two cases also resulted in the Justice Department bringing federal charges.
When the court hearings resume in Georgia on Monday, Bryan faces a possible life sentence as well, after a jury convicted him along with the McMichaels in February of federal hate crimes, concluding that they violated Arbery's civil rights and targeted him because of his race. All three men were also found guilty of attempted kidnapping, and the McMichaels face additional penalties for using firearms to commit a violent crime.
All three defendants have remained jailed in coastal Glynn County, in the custody of U.S. marshals, while awaiting sentencing after their federal convictions in January.
Because they were first charged and convicted of murder in a state court, protocol would have them turned them over to the Georgia Department of Corrections to serve their life terms in a state prison.
The McMichaels armed themselves with guns and jumped in a truck to chase Arbery after spotting him running past their home outside the port city of Brunswick on Feb. 23, 2020. Bryan joined the pursuit in his own truck, helping cut off Arbery's escape. He also recorded cellphone video of Travis McMichael shooting Arbery at close range as Arbery threw punches and grabbed at the shotgun.
The McMichaels told police they suspected Arbery had been stealing from a nearby house under construction. But authorities later concluded he was unarmed and had committed no crimes. Arbery's family has long insisted he was merely out jogging.
Two months passed before any charges were filed in Arbery's death.
The McMichaels family and Bryan were arrested only after the graphic video of the shooting leaked online and the Georgia Bureau of Investigation took over the case from local police.
Top Stories