MBC’s leader, Bilal Abdullahi, made this demand while speaking at a press briefing in Abuja on Wednesday. 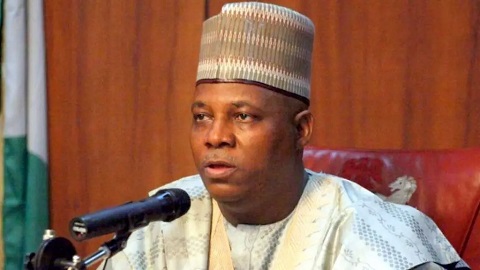 The Middle-Belt Congress (MBC) has called on Senator Kashim Shettima to resign as the vice presidential candidate of the ruling All Progressives Congress (APC).
MBC said Shettima's resignation will 'save the party from perceived impending electoral misfortune’.
MBC’s leader, Bilal Abdullahi, made this demand while speaking at a press briefing in Abuja on Wednesday.
MBC expressed its aversion to the APC’s Muslim-Muslim ticket.
“The Muslim-Muslim ticket of the APC comes with its attendant political baggage,” Abdullahi said.
“If the APC, as a party, is desirous of making any meaningful impact in the 2023 presidential elections, it behooves on the party to retrace its steps in the composition of its presidential ticket.
“We are constrained to believe that the self-confession of Senator Kashim Shettima towards the Christian community might be a ruse, as his actions of late do not indicate that of a religious tolerant individual.
“It remains a statement that since the nomination of Senator Kashim Shettima, the APC evolved into a riotous organization with various stakeholders in abhorrence for the choice of a Northern Muslim at the detriment of credible and capable Northern Christians."
Top Stories