Recall that the governor had tendered an apology to the Catholic Bishops Conference of Nigeria, over alleged ‘blasphemous’ comments about the Holy Father. 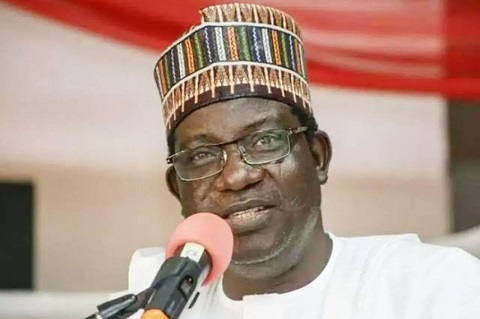 The Catholic Church in Nigeria has asked the Governor Simon Lalong of Plateau State to confess his sins and resign over his controversial comment on Pope.
This is as Catholics rejected his apology.
The group, under the aegis of Mass Servants Association of Nigeria (MSAN), said it is not enough for the governor to express remorse, adding that he must prove it by embarking on a 40-day fast and step down from his role as the Director-General of the All Progressives Congress presidential campaign council.
Recall that the governor had tendered an apology to the Catholic Bishops Conference of Nigeria, over alleged ‘blasphemous’ comments about the Holy Father.
While admitting that it was an error on his part to have linked the Catholic Pontiff with Nigeria’s politics, he begged for forgiveness and understanding from the Catholic Church through the Bishops’ conference.
But in a statement signed by Moses Idoko, the MSAN said Lalong must repent and return every penny from the promoters of Muslim-Muslim ticket.
According to Idoko, the governor should go a step further to resign as the DG of the APC’s presidential campaign council to show true repentance.
Quoting the Canon Law, Idoko said “Lalong must confess to the priest for reconciliation with God and with the Catholic Church”.
He added that “even though God is merciful and forgiving, he does not declare the guilty to be guiltless (Ex 34:7).
“Sin carries with it a need for expiation even after it has been forgiven. After David sinned, the prophet Nathan told him: ‘The Lord on his part has forgiven your sin: you shall not die: But since you have utterly spurned the Lord by this deed, the child born to you must surely die’ (2 Sam 12:13–14).
“The Catholic Church understands Jesus’ death as expiation for the sins ‘of the whole world’ (1 Jn 2: 2). This, though, does not eliminate the need for expiation of the effects of sin. In the sacrament of confession or reconciliation, the penance helps to remedy the disorders caused by sin (CCC 1459). Because sins often harm others, simple justice also requires doing what is possible ‘to repair the harm’.
“In the case of Lalong, he has blasphemed. He showed alarming disrespect to God and the Pope. The governor made sacrilegious remarks about God and our spiritual leader.
“Exodus 22:28 states, ‘You shall not revile God, nor curse a ruler (Pope) of your people’. Such blasphemy is subject to punishment by death. For, to revile God (or those whom he appointed) was to call into question the integrity and holiness of God himself.
“However, Lalong has apologised and claims to have repented. But his supposed show of remorse is not enough. He must prove it with action.
“First, the governor must embark on a 40-day fast and prayer to seek forgiveness. He must crave the face of God for turning against His people by supporting a seemingly doomed and demonic alliance.
“But most importantly, Lalong must denounce the APC presidential ticket. He must openly condemn this evil that could potentially destroy the nation. Except, these are done, the governor’s purported apology will still be seen as a charade. God can’t be mocked.”
Top Stories