The Publicity Secretary of the All Progressives Congress in Ogun State, Tunde Oladunjoye said this in a recent interview. 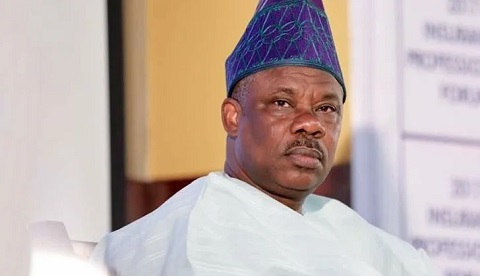 The Publicity Secretary of the All Progressives Congress in Ogun State, Tunde Oladunjoye has stated that former Governor, Ibikunle Amosun is no longer politically relevant in the state.
He made the disclosure in an interview with Punch's DAUD OLATUNJI.
Recall that Amosun had maintained that the incumbent governor, Dapo Abiodun, will not be re-elected.
Reacting to the statement, Oladunjoye said:
"We are not surprised by the utterances of a man whose ego is taller than his cap. The party has issued a statement that has been widely used. We don’t keep in focus a falsehood that even the Ogun people themselves have described as utter arrogance and a blatant lie.
Amosun, with due respect, is ‘Elesin Ana’ (no longer relevant). His political relevance and validity have expired just like his tenure.
The Hausa people do say ‘Seriki Goma and Zamani Goma’ are (ten kings with ten different styles and reigns). May we never see another inglorious and vainglorious tenure during which a sitting governor sponsors another governorship candidate against his own party!
In 2019, the APC was not even this strong. Today, the party is stronger. Highly notable personalities, including governorship candidates, who contested against Prince Dapo Abiodun, are now in the APC. The former governor’s camp is being progressively depleted. His political ‘strikers’ are now with Prince Dapo Abiodun.
Some of those you will say can never leave him have deserted and gone to the Peoples Democratic Party, leaving the few remnants in the moribund Allied Peoples Movement. He is so unpopular now that he is begging his followers for the APM tickets, and to his utter dismay, his offers were being rejected."
Top Stories