In a trending video clip on social media, firefighters are seen trying to put out the fire. 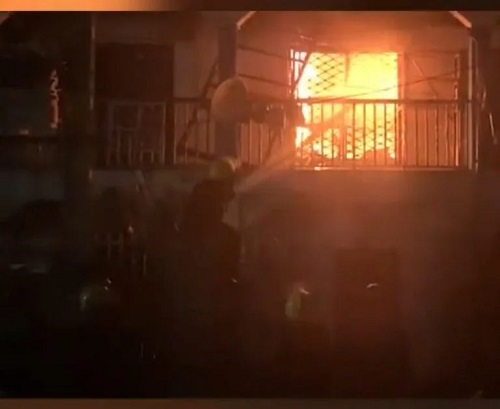 Fire has destroyed a shopping mall at Ligali Ayorinde junction, Victoria Island, Lagos.
The sad incident happened early Wednesday.
In a trending video clip on social media, firefighters are seen trying to put out the fire.
The Lagos Coordinator, National Emergency Management Agency, Mr Ibrahim Farinloye, confirmed the incident to Punch.
He said the fire had been put out through combined efforts by Federal and Lagos State fire services.
“The fire incident happened at a shopping centre but it has been handled by Federal and state fire services,” Farinloye said.
On the possible cause for the incident, the NEMA Lagos Coordinator said an investigation was ongoing and the report would be made available upon completion.
The PUNCH had on April 13, 2022, reported how a fire incident in the Maryland area of Lagos caused pandemonium. It was learnt that the incident caused gridlock in the area as passengers, residents and passers-by scampered to safety.
“We don’t have a detailed record of the incident. The disco has disconnected the power supply to the powerline. No casualty and no injury,” Director of the Lagos State Fire and Rescue Service, Mrs Margaret Adeseye, said.
“The Ikeja Electric Distribution have been contacted to rectify the depot. A high tension cable fell on the ground and caused sparkling and spread to the Underbridge Street light. There is no cause for alarm since yesterday,” the agency said in an update.
Top Stories