Lasisi is wanted in the US in relation to his alleged involvement in criminal activities in respect of which 17 counts have been filed against him in a court in Texas. 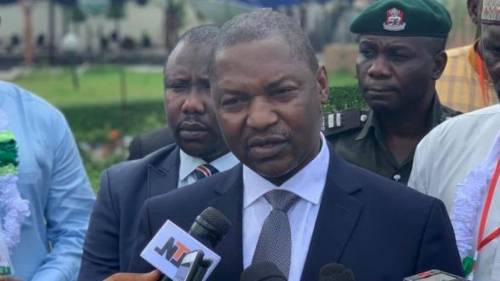 A human rights lawyer, Kayode Ajulo, has condemned the extradition process of a Lagos businessman, Adesina Surajudeen Lasisi to the United States of America.

The businessman is is to be extradited notwithstanding his pending appeal at the Court of Appeal, Abuja by the Attorney General of the Federation, Abubakar Malami.

Lasisi is wanted in the US in relation to his alleged involvement in criminal activities in respect of which 17 counts have been filed against him in a court in Texas.

He is charged with sundry offences including conspiracy to commit wire and mail fraud, an actual commission of mail and wire fraud, and money laundering, among others.

Lasisi’s alleged co-defendants are said to be currently standing trial in the US.

A Federal High Court in Abuja on May 26 granted the application by the Attorney General of the Federation (AGF) for his extradition.

However, Lasisi filed a Notice of Appeal against the said decision on the same day the judgment was delivered.

Further to the appeal, an application for a stay of execution of the judgement was also filed at the trial court.

In a statement on Thursday, Ajulo, who is the counsel for the businessman said it is unprofessional, unethical, and unlawful that Malami despite being the Chief Law Officer of the country took steps towards the execution of the said judgment of the trial court, which is already subject of an appeal.

The statement read, “It has come to my attention that the Attorney General of the Federation in collusion with the United States Government has continued with the extradition process of a Nigerian Citizen to the United States notwithstanding his pending appeal at the Court of Appeal, Abuja.

“Sometime in February 2022, the Honourable Attorney General of Federation, Abubakar Malami, SAN, instituted an extradition matter in Suit No. FHC/ABJ/CS/126/2022 before the Federal High Court, Abuja wherein he sought the Court’s Order for the extradition of a Nigerian Citizen, Adesina Surajudeen Lasisi, to the United States of America.

“Upon hearing of the Extradition Application, the Court delivered its judgment on the 26th day of May 2022 wherein Adesina Surajudeen Lasisi was committed to the custody of the Economic and Financial Crimes Commission (EFCC) for extradition to the United States of America as a fugitive and further ordered to await the order of the Attorney General for his surrender to the United States of America.

“Being dissatisfied with the decision of the trial Court, Adesina Surajudeen Lasisi in the exercise of his constitutionally guaranteed right forthwith, filed a Notice of Appeal against the said decision on the same day the judgment was delivered, the 26th day of May 2022. Further to the appeal, an application for a stay of execution of the decision was also filed at the trial Court on the same day. Both the Notice of Appeal and the Application for Stay of Execution have been duly served on the office of the Attorney General.

“It is instructive to note that Record of Appeal has been compiled and transmitted, and the Appeal was entered on 1st day of July 2022 with Appeal No. CA/ABJ/CV/711/2022. The Appeal having been entered, Appellant’s Brief of Argument and a Motion on Notice for Bail were filed on the 27th day of July 2022 within the specified time provided by law. Both the Appellant’s Brief and Motion for Bail were served on the office of the Attorney General on the same day they were filed.

“As Lead Counsel to the Appellant, I, therefore, find it highly unprofessional, unethical, and in fact unlawful that the Attorney General, the Chief Law Officer, would take steps towards the execution of the said judgment of the trial Court, which is already subject of an appeal.

“The law is elementary beyond citing of authorities that parties to a suit are not permitted to take any steps capable of foisting a state of helplessness and/or hopelessness on either party or the Court during the pendency of an action in Court and even after. When a suit is pending before a Court, neither party is permitted to dispose of the subject matter of the suit in order not to overreach the other party. This is in accord with common sense and fair play.

“Further to the above, the Supreme Court has made it abundantly and unequivocally clear that the 1999 Constitution by Sections 34 and 35 guarantees freedoms including those relating to movement, liberty and dignity of the person, and that in the protection of the constitutionally guaranteed rights, the Courts will not in the name of extradition carelessly surrender its citizens and non-citizens alike unless the due process of the law has been meticulously followed. See: A.G OF THE FEDERATION v. ANUEBUNWA (2022) LPELR-57750(SC) Pp 38 – 41 Paras E – F.

“I take the liberty of this correspondence to opine that as ministers in the Temple of Justice, it behoves us to display at all times the principles of natural justice, equity and fairness as one would not forget the functionality of the Rule of Law which the Legal Practitioners Disciplinary Committee adheres strictly to.

“Apposite to state that, the observance of the principles of the law in this case above mentioned, will not only prevent friction between the Nigerian people, the Government and the United States of America but will also avert the committal of the unethical and unprofessional conduct of the Attorney General to the Legal Practitioners Disciplinary Committee for appropriate measures where applicable.

“I, therefore, urge the Attorney General of the Federation to use the instrumentality of his good office to ensure that the hallowed temple of justice is not desecrated by ensuring that the Appellant is allowed to exercise his constitutionally guaranteed right of appeal, and the pending Appeal at the Court of Appeal is allowed to run its course before setting in motion the machinery for execution of the judgment of the trial Court, should the need arise.”