The delegation of the Wike’s camp was led by former Ondo State Governor, Olusegun Mimiko, while that of Atiku was led by Governor of Adamawa State, Ahmadu Fintiri. 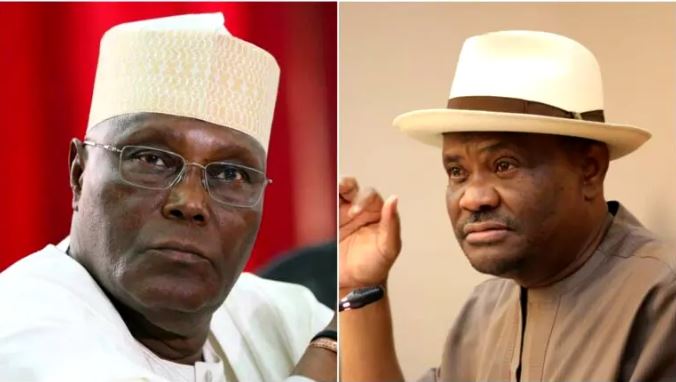 According to Vanguard, a committee that was constituted by Atiku Abubakar, the PDP presidential candidate, and Nyesom Wike, the Rivers State Governor, to seek reconciliation between the two have met in Port Harcourt the capital of Rivers state on Friday.

A video obtained by Vanguard shows the two parties representing Atiku and Wike.

The delegation of the Wike’s camp was led by former Ondo State Governor, Olusegun Mimiko, while that of Atiku was led by Governor of Adamawa State, Ahmadu Fintiri.

Speaking after the meeting, Fintiri said, “…at the end of the day we will broker peace and unify the party and Nigerians.

But, a top-placed source disclosed to Vanguard under condition of anonymity that there is still wrangling.

“They met and are to meet again. They have started the reconciliation process and hope to unite the party and unite the nation. That is the official position,” the source said.

Vanguard gathered that unofficially, there is no agreement on the main issue , which is the resignation of Iyorchia Ayu.

The Atiku group are expected to return to brief their principal, while the Wike group insisted that the resignation of Ayu was the most sensible, fair and just thing to do.

This is coming after the PDP’s Board of Trustees Chairman, Dr. Walid Jibrin, has urged the Atiku and Wike’s teams to sheath their sword.

Recall Jibrin stressed that it was important for both politicians’ camps to allow efforts being put in place to resolve the party’s internal crisis materialise.

The BoT chairman made the call in a statement on Thursday. Jibrin noted that it was time both camps see the internal crisis as a “misunderstanding” and not a “problem.”

The statement partly read, “I wish to call on all members of PDP and all Nigerians to remain calm and never create bad blood and confusion on the state of our party. All efforts are on the ground to reconciliation between wike, the party, and the presidential candidate Alhaji Atiku Abubakar.

“What is happening now should never be categorise as a problem but misunderstanding within the party. In this period leading to the 2023 elections, we should concentrate on how to win all positions to be contested and seriously adhere to the provision of the party constitution.

“My strong advice is for us to give strong support to the present Reconciliation committee set up to resolve all issues,” he said.