Jalingo had reportedly detained at the Alapere Police Station in Lagos State on Friday, before his transfer to Abuja on Saturday morning. 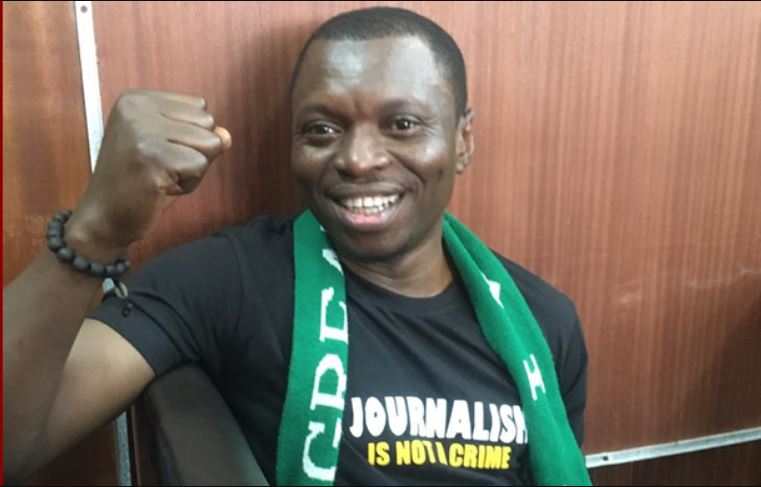 The lawyer, on Saturday said the detention of Agba Jalingo, by the Nigerian police is a contravention of the provisions of Nigerian law.

Jalingo had reportedly detained at the Alapere Police Station in Lagos State on Friday, before his transfer to Abuja on Saturday morning.

In a statement on Saturday obtained by SaharaReporters, Falana who also visited the Area F Command, Ikeja, where the journalist was initially detained, asked the Nigerian police to stop acting in contravention of the law and to release Jalingo immediately.

Falana said, "Yesterday, a team of the police personnel dispatched from Abuja stormed the home of Agba Jalingo at Alapere, Ketu in Lagos State to arrest him. After subjecting his wife and children to unwarranted harassment for hours, the police arrested Agba, yanked him out and took him to the Area F Police Command, Ikeja, Lagos State where he was detained until this morning. I met him at the police station where he informed me that he committed no offence but that his newspaper, CrossRiverWatch had only asked why a lecturer who wrote examinations for a student in the Nigerian Law School, Abuja has been arraigned in court while the student is being treated like a sacred cow.

"The police officers corroborated his account and stated that the petitioner had alleged that Agba Jalingo had committed "defamation and infringement of his integrity", which is not an offence under any provision of the Criminal Code.

“Based on the information at my disposal, I was compelled to demand for his unconditional release since he has not contravened any provision of the Criminal Code. But the police officers informed me that his detention was ordered by the Authorities in Abuja. Thus, at about 11 am this morning he was flown out of Lagos and he is currently being detained at the Criminal Investigation Department, Garki, Abuja.

"The ongoing harassment of Agba based on the allegation that he has defamed the wife of the brother of a serving Governor is the height of official impunity in a democratic society. Since defamation is not a criminal offence the action of the Police is a flagrant breach of section 8(2) of the Administration of Criminal Justice Act, 2015 and section 32(2) of the Police Establishment Act 2020 which have banned the police from arresting any person in Nigeria for civil wrong or breach of contract.

"Therefore, the police Authorities should release Agba Jalingo unconditionally and advise the petitioner to sue for libel in a civil court.”