Spokesperson of the command, DSP Daniel Ndukwe, who disclosed this in a statement on Sunday, August 21, said firearms, ammunition and other exhibits were recovered from the suspects. 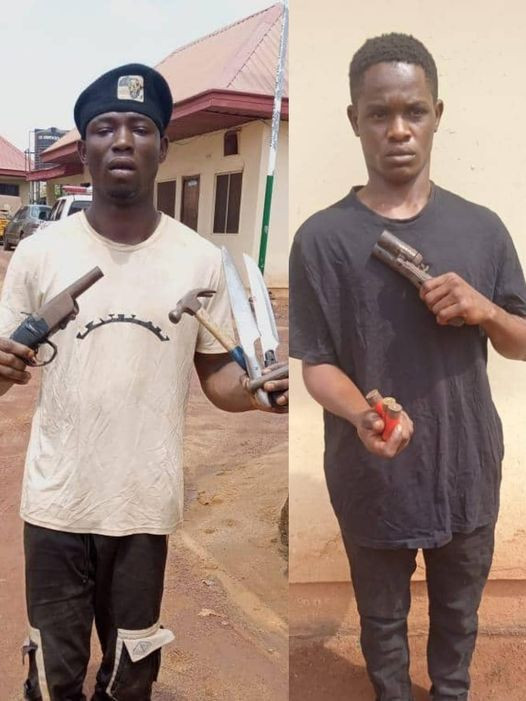 Luck has ran out on two suspected armed robbery and cultism suspects in Enugu after they were arrested by men of the Enugu State Police Command.
Spokesperson of the command, DSP Daniel Ndukwe, who disclosed this in a statement on Sunday, August 21, said firearms, ammunition and other exhibits were recovered from the suspects.
"On 18/08/2022 at about 4.30pm, Police Operatives of Enugu State Command serving in 9th Mile Police Division, acted on credible information and arrested one male armed robbery and cultism suspect, Chidera Thompson aged 24, of Amadiukwu, Uboji-Ngwo in Udi LGA," the statement read.
"One (1) locally-fabricated cut-to-size gun, one (1) dagger, two (2) kitchen knives, one (1) hammer and one (1) black beret bearing the insignia of Black Axe confraternity were recovered from him.

"Similarly, Police Operatives of the Command serving in Ikirike Police Division in synergy with Neighborhood Watch Group, on 16/08/2022 at about 3.pm, acted on a distress call and arrested another male armed robbery and cultism suspect, Onuoha Chidiebere aged 24, of Topland, Awkunanaw Enugu
"One (1) locally-made pistol with three (3) live cartridges was recovered from him, while he confessed to being a member of Junior Vikings Confraternity, where he is known as "Aso Sure Boy" and a retired Point 1 (leader) of the cult group
"The suspects will be arraigned in cult once ongoing investigations at the Anti-Cultism Squad of the Command are concluded."
Meanwhile, the Commissioner of Police, CP Abubakar Lawal, has called on residents of Enugu State to continue ro provide the Command credible information and intelligence it requires to rid the State of unrepentant criminal elements.
Top Stories