The PPRO stated that Sani Shehu, the kingpin of the gang, was shot dead when he attempted to escape. 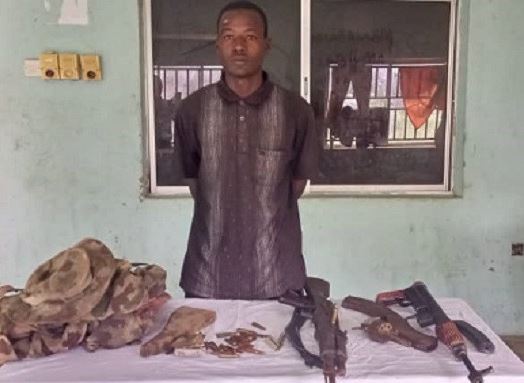 A suspected kidnapper has been neutralized by men of the Gombe State Police Command who also arrested another suspect in Akko Local Government Area of the state.

Spokesperson of the command, ASP Mahid Mu’azu Abubakar, who disclosed this in a statement on Monday, August 22, said the suspects, Sani Shehu and Mohammed Sani Adamu, were arrested while travelling to their secret rendezvous at Yankari forest.

The PPRO stated that Sani Shehu, the kingpin of the gang, was shot dead when he attempted to escape.

"On the 19/08/2022 at about 1500hrs based on credible information received by Divisional Police Officer of Pindiga Division that some suspected kidnappers were planning to strike a target around Pindiga, Akko LGA" the statement read.

"On interrogation, suspects confessed to being members of a kidnapping syndicate terrorising Pindiga, Akko LGA.

"During preliminary investigation, the kingpin one Sani Shehu led the operatives to where they hid their weapons inside Yankari forest, one AK-47 rifle, two magazines loaded with 18 rounds of live ammunition, One fabricated sterling rifle, a locally made revolver pistol with a pair of Army camouflage uniform were recovered from the forest

"Later the said Sani Shehu, who attempted to escape was hit by a bullet, was rushed to General Hospital Kashere where he was certified dead by a medical doctor while receiving treatment. The corpse was deposited at the mortuary for autopsy."

Consequently, the Commissioner of Police (CP) Ishola Babatunde Babaita, directed that the case be transferred to State CID Gombe for discreet investigation and prosecution.

"The CP further enjoins all peace-loving citizens and residents alike in the state to continue to partner and co-operate with the Police by providing useful information on any suspicious individuals or persons in their domain,” Mahid added.