Iyabo and Funke had ended their long- term rift during the AMVCA Award where there shared a hug. 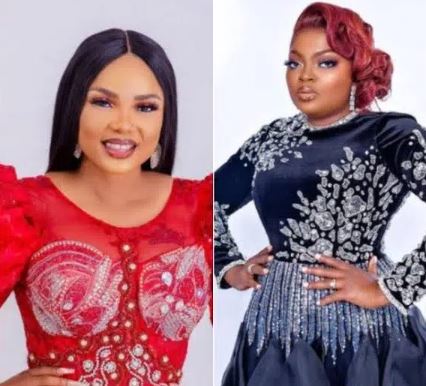 Nollywood actress, Iyabo Ojo has opened up on why her birthday message to colleague Funke Akindele was ignored.
Recall that the duo had ended their long- term rift during the AMVCA Award where they shared a hug. But, it seems like all is not well.
Trying to show that they are in good terms, Iyabo took to her Instagram page to shower love on Funke on her 45th birthday.
Iyabo prayed for more blessings and more wins for her.
She wrote: “Fly high birthday girl….more blessings more success more wins. Happy birthday mate”.
However, the birthday message didn't get any reply from Funke.
A troll identified as tscents questioned why the mum of two would celebrate her when she doesn’t follow Funke Akindele on social media.
“You too like Oju aye. Somebody you’re not following why post her on your page ma?
Firing back, Iyabo Ojo revealed that she and Funke have been trying to unblock themselves on social media since they resolved their fight.
However, the new standard set by IG has made it difficult for the actresses to unblock each other.
She said: “Ode odugbo….. Funke & I blocked ourselves and we have been trying to unblock each other, if you’re well informed you well know that IG as made its difficult to unblock each other each other once you both block each other… wisdom is profitable to direct”.
Top Stories