The group recalled that Buhari in 2015, promised to secure Nigerians and improve their wellbeing, lamenting that the economy, security and other aspects of life became worse under his administration. 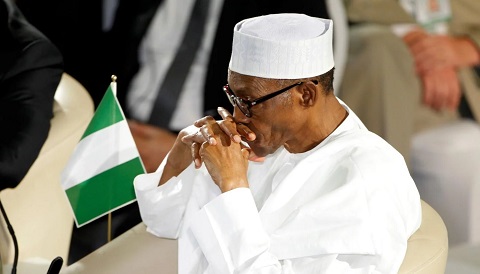 President Muhammadu Buhari has been told to tender a public apology to Nigerians for failing them.
A group under the auspices of the Middle Belt United Assembly (MBUA) said Buhari should apologize over the level of hardship and insecurity in the country, accusing him of not fulfilling his campaign promises.
The group recalled that Buhari in 2015, promised to secure Nigerians and improve their wellbeing, lamenting that the economy, security and other aspects of life became worse under his administration.
Speaking with journalists in Kaduna, on Thursday, the group’s President, Comrade Moses Mwarga Aji explained that Nigerians are experiencing the worst of their lives by going to bed with empty stomachs as the price of food and other products in the market had doubled compared to what the President inherited in 2015.
Aji noted that even with much hunger in the land, Nigerians, especially in the Northern region, were in total fear of the unknown and could no longer do anything to earn a living following the insecurity ravaging communities.
He explained, “We call on President Buhari to tender a public apology to Nigerians over his failed promises on security, economy, and fighting corruption. From bad in 2015 to worse now.”
He called on the international community to mount pressure on President Buhari to secure the nation and conduct free and fair elections in 2023 that would usher in credible leaders that will move the country forward.
He lamented that, “The nation is in suspense over the fate of 2023 general elections as some prominent Nigerians are expressing fears that elections may not be held because of insecurity. Elections must be held as planned, the Independent National Electoral Commission, (INEC), Nigerians will not accept postponement of elections.
“President Buhari should leave a legacy behind for Nigerians. The way things stand now in the country, Nigerians may not remember Mr. President when he leaves office. They may remember him only when insecurity, corruption, hardship are mentioned. Please, Mr President, use the remaining few months to correct and reset Nigeria on the path of progress, unity and development.”
Top Stories