The truck with registration number ENU112ZK, it was gathered, lost the strength to continue and started rolling backward and finally fell upside down. 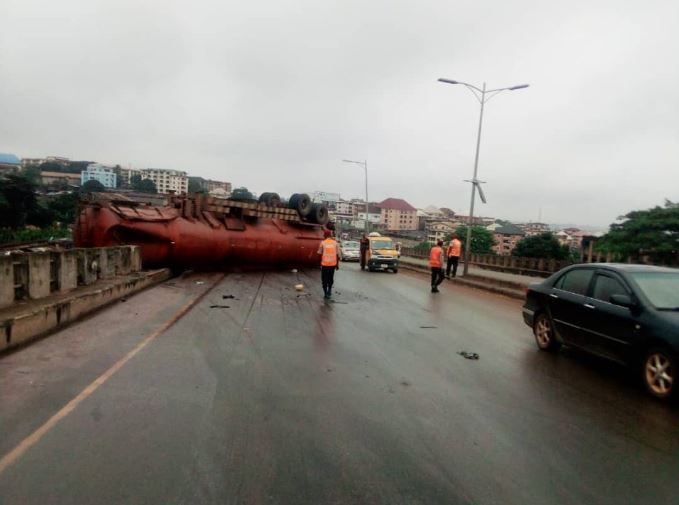 According to a report by The PUNCH, a fully loaded tanker carrying Premium Motor Spirit has gotten into an accident.

The tanker fell upside down while in motion at the New Parts area, Nkpor Bridge, along the Onitsha-Awka Expressway, Anambra State.

The truck with registration number ENU112ZK, it was gathered, lost the strength to continue and started rolling backward and finally fell upside down.

The incident, which was said to have happened late on Thursday caused a total blockage along busy road.

While the content of the vehicle is still dropping, men of the state fire service team are on the ground and had already spread chemical water at the scene to avert possible fire outbreaks.

An eyewitness said the truck driver and the conductor of the vehicle fled immediately after the incident occurred.

The area has been totally cordoned off and traffic on that lane diverted to Awka-Onitsha bound lane.

The personnel of the Federal Road Safety Corps was on the ground to control the resultant gridlock caused by the obstruction.

She said, “A tanker fully loaded with PMS with reg number ENU112ZK while on motion lost the strength to continue, started rolling backward and finally fell upside down causing total blockage along Onitsha-Awka express by Nkpor Bridge(new parts).

“The product is still dropping but information has it that Fire Service had already spread their water chemical at the scene of the incident to avert possible fire outbreak.

“However, the place has been totally cordoned off and traffic diverted to Awka-Onsha expressway.

“Also the driver of the truck and his conductor are no where to be found as at the time of this report.”