In this interview, Usman, who was born in 1953 in Azare town of Bauchi State, explained how and why he embarked on the project. 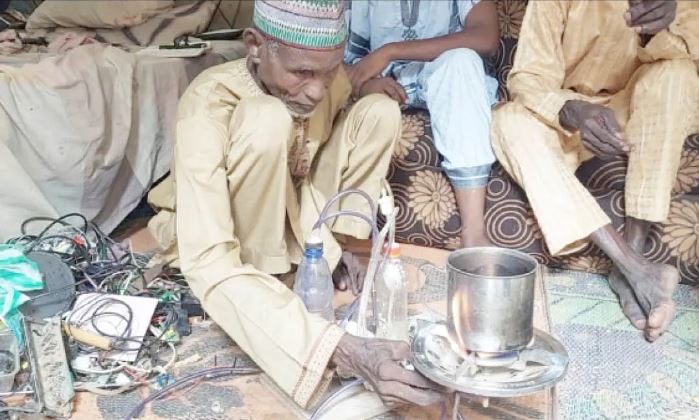 Hadi Usman, a Gombe-based self-taught ‘engineer,’ recently invented a water-powered cooking stove in response to the increasing cost of cooking gas and kerosene in Nigeria, which has made living very difficult for many families.

In this interview, Usman, who was born in 1953 in Azare town of Bauchi State, explained how and why he embarked on the project.

How did you get the inspiration to produce a water-powered stove?

A scientist always puts his mind to exploring his imaginations and create new items. For me, being an untrained scientist, my inventions are based on trial and error. If what I intend to do works, I write down the procedures on paper for future use.

As a result of the lack of stable electricity and the high cost of fuel and cooking gas, which I cannot afford due to the current economic hardship in the country, I started thinking of how to get a cheaper and more affordable energy so that I could use a soldering iron in my workshop to repair some of the electrical appliances brought to me by customers.

These developments made me start thinking of how to get a cheaper energy without buying fuel, gas, firewood or charcoal. I started thinking of a solution. It took me about three years to come up with an idea – that there is atom and electron in water, which can be used to produce electricity. Then it occurred to me that a copper, if used with atom and electron, could generate the air that can subsequently produce energy.

I spent about three years doing a trial and error until I succeeded. I started small and it gradually reached a point where, for the past one year, I don’t buy gas, firewood or gas for cooking in my house. To brew my tea and even cook a large family meal, we use the water-powered stove.

So, the inability to purchase gas or fuel made me come up with this idea.

What are the materials used to fabricate the stove?

I use water, speed motor, battery, empty bottle water and a burner. I use drinking water to produce the energy that powers the stove to cook.

But I have been modifying it. When I first made it three years ago, you needed to use a hand-pump before generating electricity, but I have developed a battery and speed motor that can produce the oxygen needed to power the stove. That saves us stress, time and energy to pump it until it cooks food or boils tea. 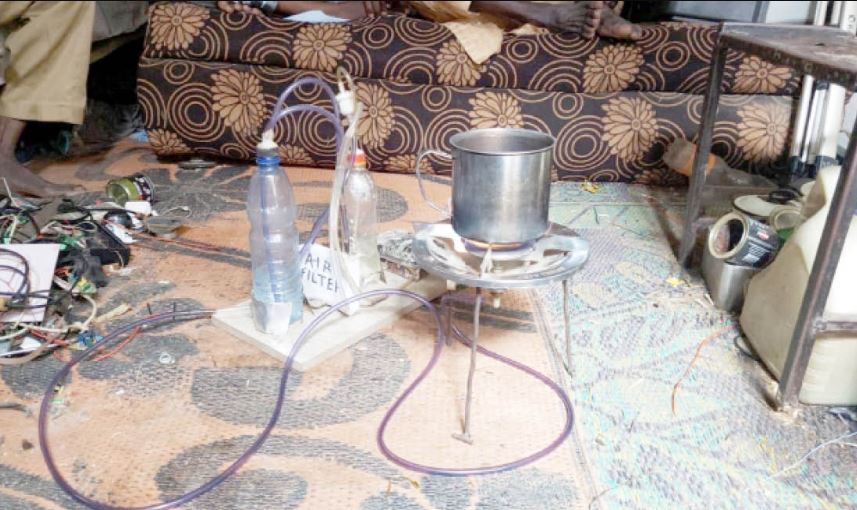 What is the quantity of water needed to operate the stove?

It depends on what you are cooking. If it is boiling water for tea or to bathe, a sachet of water, half in each bottle, is enough to last for three days, but to cook food in the house you need two gallons of water; and it will last for one month before you replace the water.

Mind you, the water level remains the same, but the atom and electron will be exhausted and you need to put fresh water. The pressure of the fire will be decreasing until it reaches a level that it can start the stove. You have to replace the water with fresh one because the atom and electron that were filtered will be exhausted and it will no longer be an ordinary water.

How much did you spend in fabricating the stove?

I cannot remember the amount because I spent over three years before coming up with it. Apart from the money spent, I also put a lot of time, which if I had dedicated in doing something different like repairing television and other electronic gadgets, I may have gotten more money. But the time I spent researching and fabricating the product is invaluable.

How much will it cost to produce a similar stove?

I will not use the same recycled plastic water bottle. For instance, if someone from Bauchi State purchases the stove, and along the way the plastic bottle or gallon gets spoilt, what is he going to do? I am planning to fabricate a metal container for the water. I am producing different designs and sizes that can serve different purposes, like small and big families and even students, among others. I am still experimenting, so it is still an ongoing project. It is yet to get to the final stage where I can take it to the market for sale.

Are people contacting you to buy the stove?

Several people from Finland, Austria and Netherlands have called me several times to inquire on how to partner with me on the project. Some Chinese have even visited me and we discussion on whether I could sale the technology to them or become a partner and get a stake when the stove is produced in a large quantity. But I told them it is still a work in progress and after I finish and acquire a copyright I will decide whether to sale it or start producing them in a large quantity.

Also, hundreds of people have been visiting my house. And I have been receiving numerous phone calls from different states, inquiring to know when the stove would become available in the market. But my answer always remains the same – it is still work in progress.

How soon will it be available in the market?

I cannot exactly say because the project is still ongoing. However, I hope to finish it very soon and make it public and available in the market for people to buy. My target is even to go beyond that to a point where we can have motorcycles and other vehicles using water.

Has the government offered you any assistance?

From 1975 till date, there has been no form of assistance from either the local, state or federal government.  All they do is to visit the workshop, admire my works and leave.

But after Daily Trust and other media houses interviewed me recently, we are now discussing with some government agencies. Also, the Gombe State University has offered me a contract to start teaching students in the Physics Department on practical aspects of Electrical Electronics, satellite installation, among others.