Unbelievable! Man Coughs To Death While Waiting For A Taxi In Akure


The commuter vomited blood while, coughing, an eye witnesses said. 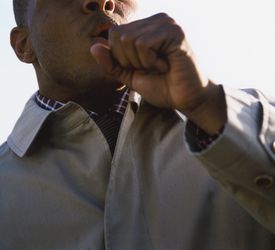 In what will come across as a very startling development, a middle-age man has died in a really traumatic manner.

The News Agency of Nigeria (NAN) coughed to death in Akure on Thursday while waiting for a taxi.

The commuter vomited blood while, coughing, an eye witnesses said.

He said the man gave up the ghost before first aid could get to him.

“Items found on the deceased were some drugs suspected to have been bought at a medical teaching hospital in Akure.

“The incident was reported to the police which evacuated the corpse to a mortuary,’’ the eyewitness eye witness said.

Police spokesperson in Ondo State, SP Funmilayo Odunlami, confirmed the death to the News Agency of Nigeria (NAN) and said the corpse had been deposited in a mortuary.

“It is true and the young man has been identified. Efforts are on to get his family members,’’ Odunlami said.