Recall that Biggie had on Monday instructed Allysn and Sheggz to wear the clown outfit daily for emerging the tail of the house. 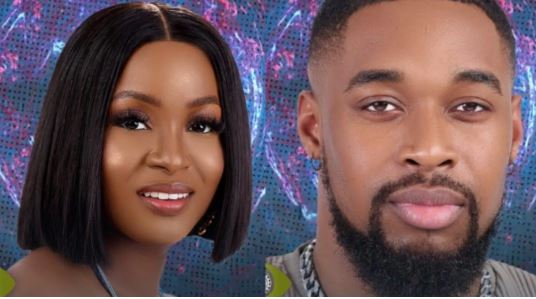 One of the Big Brother Naija, BBNaija season 7 housemates, Doyin, has made a revelation about Sheggz.

He narrated that Sheggz threw his slippers at the wall because he was angry with his girlfriend, Bella.

Doyin revealed this during a conversation with Allysyn on Friday.

She said Sheggz was mad at Bella and was also angry that he was wearing the clown outfit.

Recall that Biggie had on Monday instructed Allysn and Sheggz to wear the clown outfit daily for emerging the tail of the house.

The instruction did not sit well with Sheggz as he has been complaining about the punishment.

Doyin said, “’Yesterday, Shegzz was very angry, he took off his slippers and threw them at the wall. I was shocked and surprised that he did that.

“He later told me he was really pissed at her and the fact that he was wearing the clown outfit.

“He doesn’t have an outlet. It is not like he can drive out or work away sometimes. We are humans. I just told him not to be hard on himself

Doyin, however, added that Bella felt uncomfortable when Sheggz was having the conversation with her.

But Allysyn advised her to stay neutral if she will speak on the issue with the couple.